I would rather listen to Devilstrip than watch the Devil strip! 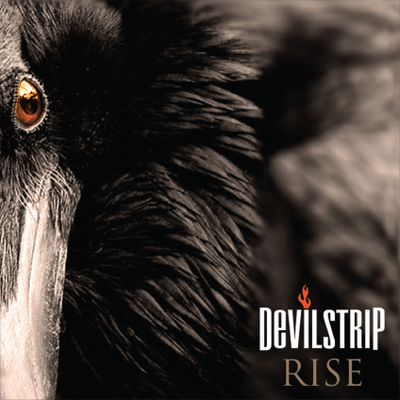 For any of you sensitive, or drunk, souls out there the review title was a pun. I would love to see Devilstrip play live having listened to their début album. Devilstrip are a three piece American band from Akron, Ohio home of both Devo and the Black Keys. Although I think that the main thing these three bands have in common is Akron.

Devilstrip have more DNA from some heavy British bands like Iron Maiden and Def Leppard in my opinion. However they are very much Devilstrip. If you like your rock music loud and meaty with powerful riffs, great hooks and excellent melodies then you had better check this band out.

Their début album is called 'Rise' and it's a barnstorming corker of a first album. From the opener "Not What You Need" to the closing track "She Said" it retains it's high standards. My favourite tracks are "Kill The Headlights (Roll)", "Are You Ready" and "Kill The Enemy". But the next time I listen to the album that will probably change.

The band consists of three very talented musicians; Marc Wasmund (lead vocals/guitar), Graig Lindgren (bass/vocals), and Jimmy Gray (drums/vocals). They have built up a great live reputation and have supported some well known bands including Europe and Buckcherry. They will be playing live in the UK in the spring of 2016 and I am certainly planning to seek them out.

If I were to give this album marks out of ten it would be 7.5. I would rarely give anything a ten so that from me is a big score. I believe that Devilstrip have the potential given the right breaks to trail a powerful blaze across the map of heavy rock. I would love to see them play live, particularly on a festival stage. 'Rise' is scheduled for UK release in January 2016. (It was released in the USA in late 2014). I suggest that you check it out and then go and see them if you can.