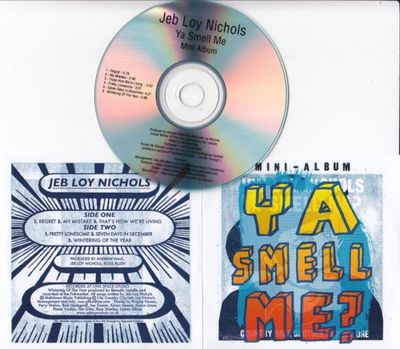 Jeb Loy Nichols new mini album, 'Ya Smell Me?' is a classy and funky collection of songs that epitomise what country soul ought to be. Mr Nichols was born in Wyoming although he has lived in Wales since the 1980s. At one time he was signed to Capitol records but sadly his first solo album 'Lovers Knot' didn't sell as much as the big label wanted. After that he honed his craft and went from strength to strength releasing albums on a number of different labels including Rough Trade and Tuition.

If you are a fan of the softer side of the Average White Band or the more acoustic side of Bill Withers or Shuggie Otis and you have a love of some of the more modern country music then you will take this new release to the heart of your music collection. Hell if you're just a big music fan then you'll love it. I certainly do!

Lyrically Jeb is incredibly well developed and the musicianship on these six songs is first class. My favourite song of this set is the gorgeously laid back "7 Days In December" which despite it's title is one of the best summer feel songs that I have heard in a long while.

"That's How We're Living" and "Regret" are also great songs. Back in the old days of the charts I feel that most of these six songs could have been top ten hits. "Regret" would mix really well with the Climax Blues Band's "Couldn't Get It Right". Having listened to 'Ya Smell Me?' more than four times already I am now really keen to see Jeb Loy Nichols playing live. I will be on the lookout for any of his gigs near to me and after listening to 'Ya Smell Me?' I believe that you will be doing the same. If you're not then I expect a letter from your parents explaining why!