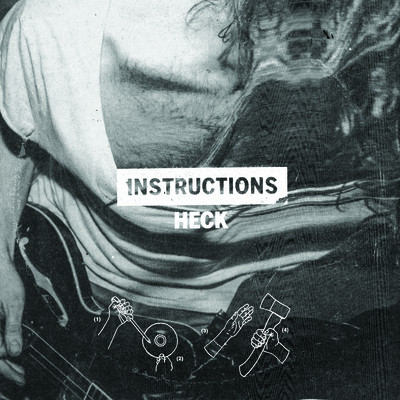 If you’ve ever been to a Heck show (FKA Baby Godzilla), you’ve probably tried to explain the experience to someone you know. The noise, the energy, the wilful disregard for band members’ safety and that of their instruments. It’s a manic affair that sees the focal point of the gig shift from the stage to… well, everywhere in the venue.

Without visuals, the prospect of replicating this experience in a studio release seems impossible, without creating an experimental project. For this reason, my expectations for Heck’s debut are fairly low, and I’m braced for 40 minutes of rash hardcore music-riffs galore, but likely lots of filler.

I am, however, entirely mistaken.

'Instructions' grabs you by the throat from the opener, lead single "Good As Dead", a song that fits the expected Heck formula for songs. In fact, much of the album plays out like this, charging riffs and sudden halts, reminding you of the jarring but perfectly synced performances this band are by now well known for doing.

There may be a feeling for some of disappointment when they see the tracklist-7 new tracks (including the lead single of the album) are accompanied by hree other previously released singles. "The Great Hardcore Swindle","A Great Idea Bastardised" and "Don’t Touch That Dial" (the former released on Shikari’s Ambush Reality label) are great tracks, and a more than appropriate introduction to the band if you’ve not heard them before-but they’re by no means new ("DTTD" dates back 3 years). Any disappointment, however, is quickly forgotten once they’re heard in the context of the whole 42 minute LP.

In fact, much of the runtime of the rest of the album is the result of the last song - a huge, 16-minute beast that threatens a bloated, cheesy, inappropriate quarter of an hour. In reality, this three-part song is far from that. "See The Old Lady…" mixes the intense manic rhythms of other songs on the album with a surprising use of clean vocals and bluesy melodies. It’s a clear demonstration of what is sometimes too easy to forget elsewhere in the album - Heck are excellent songwriters, and no amount of music video and mad-gig fun can diminish the fact that they have serious ambition.

This isn’t an album for easy listening, background music, daydreaming. It grabs you by the throat, the band forcing you to listen, to look, to be involved. Play it loud, and wait for the day you get to see this album brought to the stage… or, more accurately, the floor.