BoomTown Fair is a music and arts festival held near Winchester in England, with a capacity of around 60,000 people.

The Most Boomtastic, Bombastic, Bombshell Of A Festival! 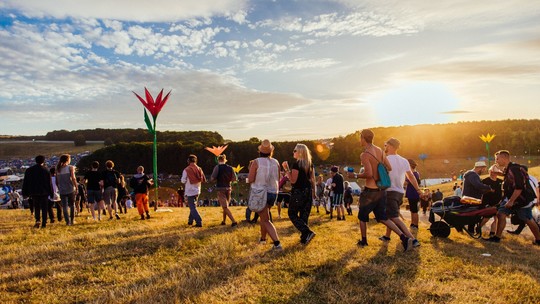 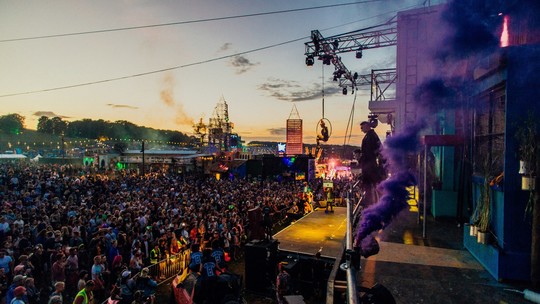 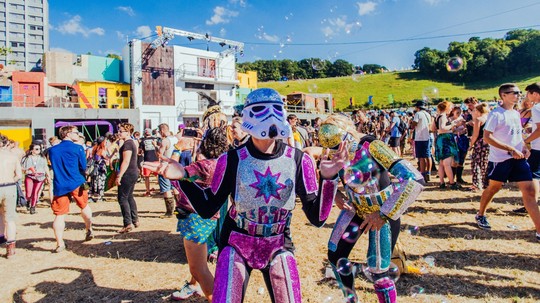 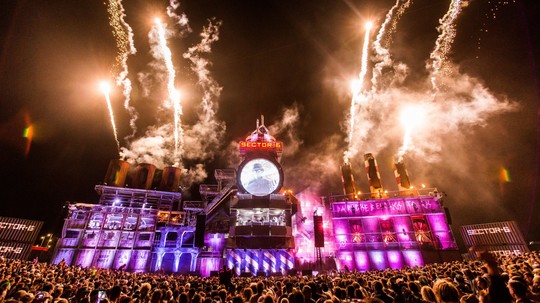 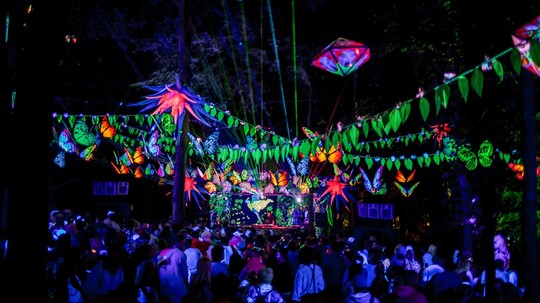 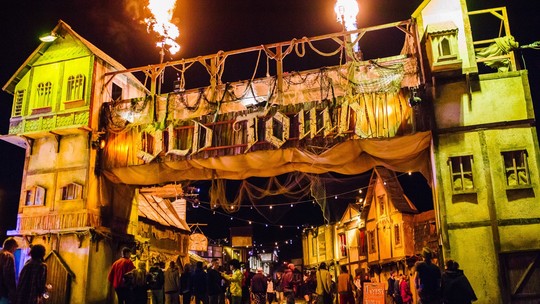 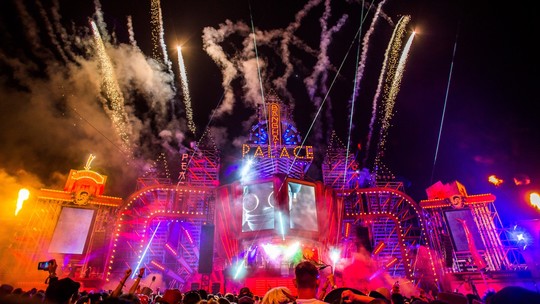 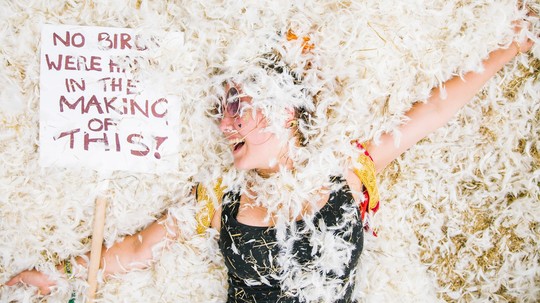 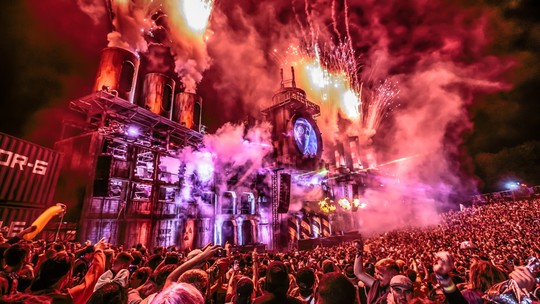 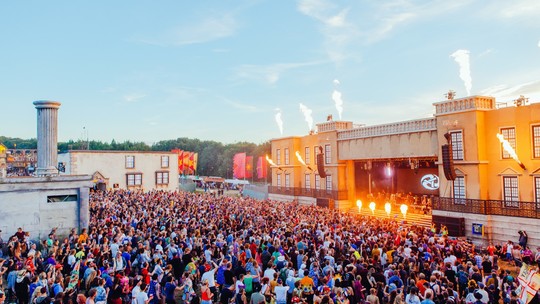 So we started our Boomtown journey with a 40 strong coach that left the Manor House warehouse community at 9am sharp! We had a big troop of regular Boomtowners and new ones, who were excited to see what the regulars like myself had been banging on about for the last year or 2 or 3 or 4 and in some cases 7!!

As a place to get to it's pretty dam easy, if you're heading from London that is, it only took a couple of hours and no one ran out of beer... so I would call that a successful and pretty fun voyage up to the gates!

I´ll skip all the crap about getting into the festival as for my trip it was really quick and easy. But FYI if you go by car or train get there early cause you're gonna be stuck in a massive queue of traffic or a massive queue for a shuttle bus. This ain't a trait of Boomtown it's the same at all festivals.

Once inside you gotta decide where you wanna live for the next 5 days, this is not a normal festival with you standard camping spots, the whole festival is set up with town zones.

I won't go into too much detail about all the zones, but I would suggest if this is your first time and you're an avid raver and like a bit of punked up apocalyptic madness on your doorstep then head straight for Downtown. If you're less of a mentalist and like things a bit more on the less hectic side head up the top of the hill to areas like Wild West, Trench Town or Town Center. Basically all the stuff at the top of the hill!

And that's one big thing about Boomtown... hills!!! There's a fucking lots of hills so make sure your skanking boots are also build for a good bit of walking. Trust me, you get used to them, sort of ;)

So the music kicks of on Thursday afternoon, which is dope because you can crack out into the madness of the city as soon a you have pitched your tent. And what madness it it is! This festival basically puts more effort into decor than the biggest of Psytrance parties you have every been too. An FYI, it has two Psy forests, if that's your flex. The best way to describe it is like a massive film set that's been taken over by a mad creatively obsessed cult of raver punks, who have whipped up a maze of a city that has massive stages and small, large and loud surprises around every corner.

There were some new timers in our group so we pretty much spent the day time just rambling around checking out all zones and getting a feel for the layout of the place.

We head to District 5 that evening and got too see the very sordid scenes of the red light direct and hear some the best underground hard dance music around. From smashing DnB to Hard Tech, Gabba and all crazy mash ups you can think of. Just be prepared to be given hard hitting music vibs as well as a robotic apocalyptic visual experience around every turn!

On Friday the first thing we headed to check out was the Tangled Roots which is one of the many forest venues at the festival. It´s a lush epic Reggae sound system by the team Lion Unit and it's massive! It's probably the best biggest bass kicking venue at the festival, which is why it shuts at 10pm every night instead of 4am. But top tip from me, ear pugs are a must as it's big bad and very loud. But when that bass hits you you'll definitely be skanking in the sand for a long while.

The rest of that day was also bouncing about around the festival checking out Ska bands, some Punk and some Reggae vibes. Which is the best thing about Boomtown because it's got such a great selection of new, old and just unheard of awesome bands, DJs and people doing the own bit interactive theater all over the place. So you can just pack a bag full of beer and go get lost in the place without a program of stuff you know you want to see. You just let the festival pick you up an whirl you through it. That night was mostly spent in Downtown/China town again as me and my mate Matt were the Breakcore heads of our group and we head some stuff to see and generally wanted to hit up some more crazy hard hitting tunes. I have to say for me that's one of the best bits of Boomtown, it's a music scene I don't actively get involved in on normal gigging/weekend parties any more so it's great to have it represented at Boomtown. If you're like me, most of what's downtown has something ace to dance to, but top venues are smallish ones, The sewage works, The So Fun Tek Shop and Scrap Yard. I ended the night at the Wild West catching one of the lesser known bands called Vegetable Collective, who smashed the roof off with the super knees up cockney geezer ska punk, a punk ska rendition of the Grange Hill theme tune was epic!

I was petty well behaved and put myself to bed at 4am, which is the time the festival powers down the sounds and rests up for the next day. But the crowd like most festivals keeps itself occupied by exploring the night. The Boomtown crowd is a fantastic mix of all sorts; crustys, hippies, punks, rude boys and rude girls, some cagey types and your standard hunter-wearing-chino-shorts-clad preppy types. But all have one main thing in common their love of a good party, so don't worry if some of the crowd don't seem like your normal social bunch, they're all wanting to chat shit and will happily march around the festival with you till dawn.

Sat was a more chilled vibe in the early parts of the day, it was blazing sunshine for the Skints at the Lions Den. Which is an epic Aztec temple in its own massive amphitheater. Me and my mate paid a trip the Job Center later, and yes it was to get a job!

You notice when you're at Boomtown it's a city with all the same shops and social care opportunities you have in the real world. Police, Post Office, Hair dressers, Pole Dancing Clubs (robotic or human) and of course the local Job Center. By day you queue to get your Dole cheque and hope to be given a job you're suited to and by night it's all bass lines. After filling out the forms and having an interview we were set, we were buskers! With tambourine in hand we set forth to earn us some rewards, to hopefully bring back some evidence of our great work, which was´t much haha.

I had my only real must see act of the festival on Sat which was Leftfield, they did not disappoint!! Epic tunes and amazing visuals. If you get a chance to see them do it!

Sat was the day the festival really started pushing this year's chapter in the story the festival has running through all of the stages and districts. This year was the start of the revolution, and throughout the day we kept bumping into the marked men from Sector 6 (a massive stage in its own right). They were out and about dropping clues to things happening around the festival that day as well as handing out manifesto leaflets.

Later that evening we got a really big dose of the narrative at Bang Hai Palace the epic dance stage built by the dictator of Boomtown, Comrade Jose, to reinforce her position as leader the year before. But that night it was stormed by the masked men on zip wires. They stormed the stage and made an epic speech, which had a long build of heavy sound in it, that you know was gonna blow the lid of the place... and then BOOM!!! At the end of the speech the fireworks and fire jets went high into the sky and the massive Neurofunk DnB we all knew was coming kicked off.

Sunday was very much a rest day for me as I had to go that evening so it was all Reggae at Lions Den and catching some gypsy bands on the giant pirate ship stage. And of course a nice bit of heavy bass bathing in the Tangled Roots.

I've probably waffled on at bit (it's my first review so give me a break), but I hope you've wanted to make it to the end. Boomtown is probably the best festival I've been too in all my years of festivals so far, it's got music from all corners of my youth to my current life. When I got there I can really sense the guys that run it literally want you to be at the best party they can produce. It has this because it was born by the punk ravers of the now rich history of the UK's rave culture. Every ilk free party or squat rave you have been to or heard of is represented, plus a diverse lineup of amazing live acts and interactive theater. Its commitment to having creativity running through every element of the festival is breathtaking and you do end up feeling part of their story. And it's a story I hope to continue being part of for many years to come.

Go to Boomtown and be amazed!!