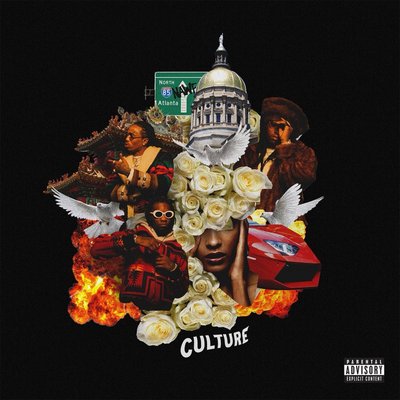 After spending much of last year featuring on projects with the likes of Travis Scott, Young Thug and 2 Chainz, Migos highly anticipated album 'Culture' is finally here. Migos are an American trap trio consisting of Quavo, Takeoff and Offset. Many will know them through their catchy breakthrough track ‘Versace’, popularised by a Drake remix. Much like the rise of the popularity of grime in the UK and overseas, trap has also found a popular audience outside of its Southern home, a link that Quavo is not afraid to draw, even referring to Migos style as hyped up dark grime.

Migos have succeeded in promotion of themselves and their music through their catchy quotable lyrics, whether that be their regularly memed lyrics or rapping children’s books on the radio. Their catchy and simple style that gained them popularity with Versace is present throughout 'Culture', and is in part what makes it so addictive to listen to. Each track feels as if it retains a base beat, more often than not of heavy bass, with the trio building an adding to this to differentiate each track. 'Culture' indulges in excess throughout from its aforementioned bass heavy beats to its ostentatious lyrics. Even the features express this excess with the likes of cult rapper Gucci Mane and 2 Chainz, who is reported to charge $100k a verse.

The most recognisable song from 'Culture' comes in the form of "Bad and Boujee", featuring Lil Uzi Vert. Released as a single last year and spawning many memes with its lyrics, most notably ‘rain drop, drop top’ among others. The track proves you don’t need legendary features and a multi-million dollar recording studio to make a hit track, with the track allegedly being recorded in Offset’s basement. The trio also recently, during a radio interview, rapped a children’s book entitled Llama Llama Red Pyjama over the beat of "Boujee", which is definitely worth a listen and sure to spawn many hashtags and memes in benefit of their new album.

The albums title track "Culture" features legendary multi-award winning hip-hop producer DJ Khaled, who takes aim at those who ever doubted Migos, a possible reference to the disdain that some hip-hop fans show to their musical style and those who are quick to write Migos off as one hit wonders. This bass heavy track sets the tone of the album, introducing each of the trio for the forthcoming tracks.

"Deadz" features 2Chainz, who is somewhat upstaged by Takeoff who offers a standout verse here with a quickfire flow, a stark contrast to his stuttery delivery on the track "T-shirt".

"Slippery" features Lemonade rapper Gucci Mane. Since his release from jail last year, Gucci has been busy, especially with features. Featuring on the chart topping 'Black Beatles' with Rae Sremmurd and the recent 2Chainz mixtape ‘Hibachi for Lunch’, Gucci once again offers a brilliant verse in his recognisably smooth flow.

"Kelly Price" features Travis Scott and is arguably one of the tracks likely to be another hit single for Migos. Both due to quickly rising rap star Travis Scott’s feature and the catchy hook "Quavo", notably the lyrics ‘She gonna eat this molly like it’s rice’ and ‘I’ma make her sing like Kelly Price.’ Scott’s sound is highly prevalent on this track and, in fact, his influence can be heard throughout the album, both on the songs he had input in and those he did not.

Of the three, "Takeoff" especially stands out on 'Culture' in the way that he approaches his verse, from his choppy split syllable style on "T-shirt" to his no breather free flow on "Deadz". The diversity of his delivery really shines through here.

Part of what makes 'Culture' so enjoyable to listen to is that you can tell they are actually enjoying themselves when making the music. Migos offer what many hip-hop snobs will listen to in disdain, proclaiming a dumbing down and over simplification of rap music. But these opinions are not something the trio are worried about opting instead for the sound that they and their fans enjoy to listen to and create. Sometimes it is the simpler things things in life, or in this case music, that are more enjoyable and that is the case here, so press play, turn up the bass and dab away.