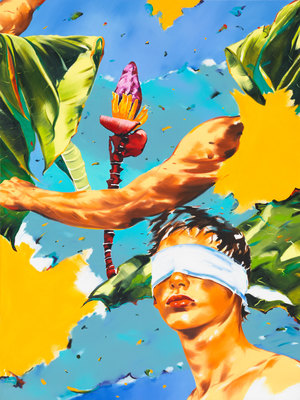 Recorded in Berlin with producer Konstantin Gropper (aka Get Well Soon), ‘Homotopia’ is a the incredible debut album from Canadian born and UK raised Sam Vance-Law. A collection of songs that range from modernist classical to witty pop, from the choral to the orchestral, it’s a record that see’s it’s male investigate a number of common homo-stereotypes.

From charming current single ‘Gayby’ to the smiths-like indie of ‘Prettyboy’, the ornate balladry of ‘Stat, Rap’ and the psychedelic pop of ‘I Think We Should Take It Fast’ it’s a record that jumps from genre to genre at dizzying pace. In one moment filled with guitars, the next broken down to an operatic vocal, this is a record you’ll either love with all your heart, or be left breathless and confused by. But if you’ve ever fallen under the spell of Rufus Wainwright, or been drawn in by the clever, intricate lyrics of Father John Misty, ‘Homotopia’ could be one of 2018s essential releases, and Sam Vance-Law one of the most exciting new artists of the year.