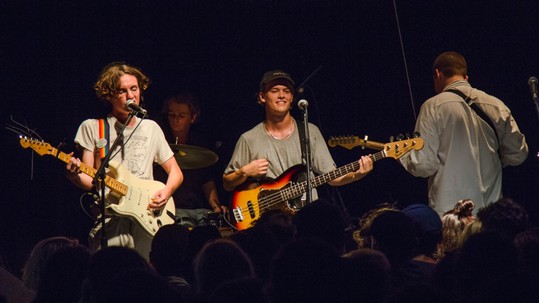 The Great Escape Festival, Brighton’s new music showcase-industry convention, made its annual return to Brighton in May, taking in a bigger number of venues across the town and a music industry conference for the music professional holding the more expensive conference ticket. With its parallel Alternative Escape festival focusing on international and local acts playing shorter daytime sets for free, you can still enjoy and feel part of the festival without having to pay for a wristband-ticket!

We got into town on Friday and head to the Black Lion for Impressive by The Sea showcase, which started off with Thom Artway's solo set. The Czech singer-songwriter delivered an upbeat stripped down and acoustic set, with nods to Mumford & Sons and the catchy choruses of Ed Sheeran. In his first international single 'All I Know', released in June, the singer shows how good he is at creating nostalgia through dreamy melodies, something he is also capable to translate live.

Next up was Estonian wunderkind NOËP, who gave a fantastic and memorable performance, with his EDM-like live set and warm vocals, which we thought were better live than on the recordings of his recent EP 'Heads In The Clouds'.

We went from Ibiza vibes to post-punk loud guitars when Auckland's Yukon Era were next to hit the floor. Already supported by the likes of Clash and Little Indie Blogs to name a few, the band's honest songwriting, heavily influenced by post-punk chords, the band's recent single 'Feel' features driving percussion and monotone vocals. The emotional weight is heard during the bursting live show, which is paused by vocalist Christian Dimick jokes about dying for a Bloody Mary.

Taking the stage next is another New Zealand punk rock band, Bakers Eddy who's melting live show is hard to forget. Their new EP 'Good Decisions' is out now and their direct and in-your-face-attitude will blow your mind.

Finally, the biggest and most important band on the lineup, LIFE take to their stage with their live set punctuated by anti-establishment and social commentary lyrics and British grassroots post-punk attitude. This is the most important punk band coming out of the UK in recent years, watching the singer performing is an experience we can only compare to watching Ian Curtis performing live, like the Joy Division frontman, LIFE's singer has cultivated one of the most captivating live performance styles we have ever seen.

Closing the day-time stage Diesel Park West frontman and chief songwriter, John Butler, played a solo and acoustic set to celebrate the vinyl reissue of his critically acclaimed 1997 solo album ‘The Loyal Serpent’. John Butler still has a strong voice and he is still a great and classic British songwriter, one whose return we cannot wait for!