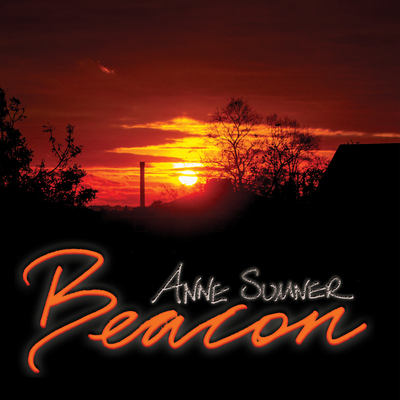 Sussex-raised Croydon-based singer/songwriter Anne Sumner has recently released her second full-length album, ‘Beacon’ which certainly befits the current seasonal-shift; as it is contralto-rich with fluctuating autumnal hues and textures.

Her overall work has always focused on the themes of: tempus fugit, versatility, correction and light. ‘Beacon’ displays a maturity and fruition, rightfully influenced by the decades-old array of popular Singer/Songwriters, but with an ‘ambience’ of the kind prevalent on ‘Tapestry’ or ‘The Hissing Of Summer Lawns’; which has previously taken Anne’s mentors numerous musical shifts/album-releases to acquire.

‘Beacon’ begins sparsely with ‘Behind The Lines’: a military-style ‘80s thumbs-up to both ‘Brothers In Arms’ and Pink Floyd’s ‘When The Tigers Broke Free’ by way of the essence of Joni Mitchell’s ‘Clouds’ album. Her variable vocal-style sets the pace for the rest of the album which gets underway with her winsome fingerpicking in ‘Fire On The Mountain’, an early ‘chill-out’ moment, and a good excuse for indulgent reflection.

The Leonard Cohen/Celtic-tinged ‘Daughters Of Mercy’ is a hybrid of the aforementioned two songs, with flighty fireplace imagery. Anne’s muse later transcends with the idyllic Fairport-like exterior of ‘Last Summer’ containing both a buoyant lilt and her life-affirming rhythm-guitar: a gateway to the contemplative ‘Swim Any Sea’ with its shades of Dylan’s ‘When The Ship Comes In’ and his cover of the folk ballad, ‘Canadee I O’.

‘Mile Away’ and ‘ From You’ respectively epitomise the album’s seasonality with the earthy 6pm ‘Sister Lovers’ by Big Star vibe of the former song, and the swirling McCartney-like bass line of the latter. As it winds down, ‘Beacon’ takes on an almost spatial feel with the ambiguous ‘Flowers’ which has inevitable Pre-Raphaelite leanings, but is left weirdly hanging in mid-air Young Marble Giants fashion. This shows that not everything is infallible. This is also certainly true of the empathetic arpeggiated ‘Some Kind Of Comfort’ and the piccolo-driven ‘Win Or Lose’.

‘Beacon’ definitely functions like a triptych of the ‘human condition’. No doubt Anne Sumner wanted to convey this from Day One. However, there is zero polemic on her agenda. Just a well-crafted selection of intelligent epic songs that will allow the listener to ‘switch off’ in their own world or that of Anne’s. Take your pick.