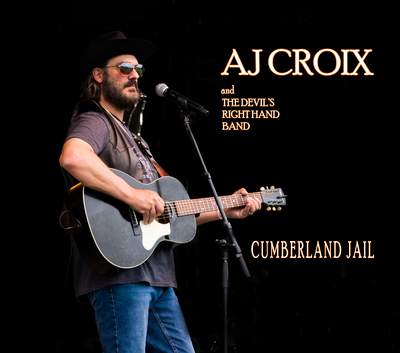 The collection of songs on the album has hints of southern rock mixed with outlaw country and traces of old school Waylon and Willie. There’s even an expression of recognition and respect, to Wille Nelson in the song “Goodbye Nashville” and a little Waylon Jennings on the song “Cumberland Jail” with a bit of George Jones in “I'd Go Dry.”

Croix, not only sang, he wrote and produced every track on the 10-song album. He also played multiple instruments and along with the talents his Devil’s Right-Hand Band they deliver an album that would make the founding fathers of country music proud.

Croix and company effortlessly deliver honest storytelling lyrics with soulful yet harder edged melodies. The new album is diverse in its musical style, but the early country and singer-songwriter influences stand out. The album was mixed by AJ Croix and Malcolm Burn (Emmylou Harris Bob Dylan). Also lending their talents is Jimmy Somma on electric guitar, Bill LaGreca on bass and Steve Decker on drums.

AJ Croix is a genre-crossing singer, songwriter, and an excellent guitar picker leading us into the future, while keeping a foot in the past, where musical lines cross, with great country, southern rock and roll and a real voice.