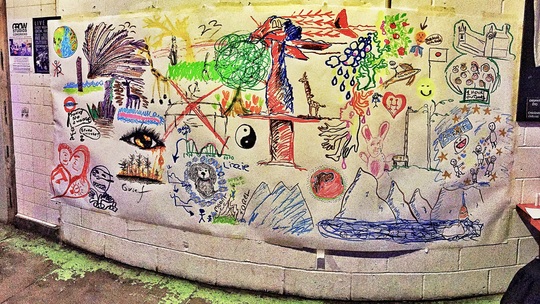 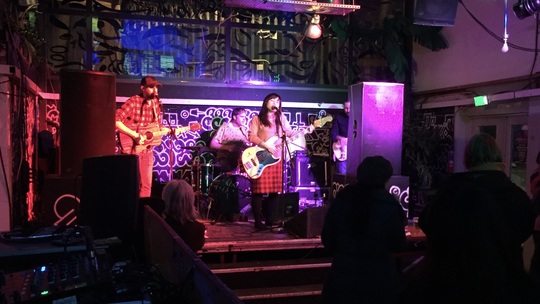 Mount Forel make a ferocious noise. The band are becoming known for their unique gigs (their last one saw the entire audience blindfolded) and tonight is no different.

Taking to the stage at Grow in Hackney, a creative art space which as the night progresses will reveal itself to be a venue that makes perfect sense for this gig.

As we arrive we’re handed an envelope and instructed not to open it until we’re told. The envelope contains 3 notes. The first of which instructs us to simply ‘relax and listen to the music’. And we do. There’s a grungy Americana feel to the tunes. Early single ‘America’ is an epic 6 minuets long, sounding at times like Neil Young with psych sounding guitars and pounding drums.

The second note - “Paint the political landscape in the place you were born”. Audience members are now encouraged to add to a huge canvas hung on the wall. Donald Trump, Brexit, Forest Fires and more than one giraffe feature. Other notes spotted include “Paint your idea of hypocrisy”. “Text us a poem” and “enjoy a drink on us”. It's a fun concept and it feels like the band have pulled it off, while managing to hold the attention of the audience.

The night ends with latest single ‘Witney’, a raucous breakdown with frantic drumming, followed by ‘Greenland’ which rumbles along to a rousing crescendo, and the mural is complete. With an album in the offing, it's impossible not to wonder what they’ll come up with next.