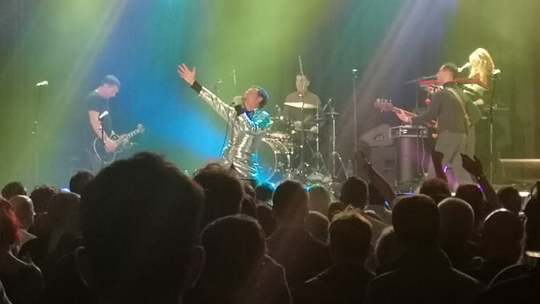 We're back in Islington, on home stomping ground again with My Life Story. Jake Shillingford and the boys (and girl) – and a special guest appearance from one Steve Norman - who you will know better in the familiar guise of the saxophonist in Spandau Ballet ('True' etc) – with admirable support tonight from Salad.

This time we're in the spacious surroundings of the Islington Assembly Rooms. There's a chill in the air outside, but the rain is holding off. It's far from being 'the hottest day of the year' as Jake recalls the last visit to Islington in July (you can read that review HERE ). Being pedantic, it was the day before the memorable record mercury topper – but we won't quibble as it must've felt clammy enough under the lights, putting on an energetic show in shiny suit with a room chock full of sweaty punters.

A lot of those said punters were out again to cheer their home team – jackets instead of t-shirts. 'Extreme weather - extreme fans' - as Jake quips.

Exterior temperature fluctuations covered, we're straight into the lead tune – the atmosphere inducing ‘The Rose The Sun’, a piece of neo-new romantic electronic terraforming for the interior of the hall. 'My love is like the rose, The more you cut it, the more it grows'. I'm feeling the '80s again.

Jake announces the next song up is the latest single, 'Broken', pulled from the current album, 'World Citizen'. As I mentioned last time, this an up-tempo jangly guitar verse and chorus, fresh and catchy, familiar and satisfying - which successfully plays the angst of the lyrics against the bouncy pop of the music. An appropriate single.

We follow up with 90s My Life Story favourite ‘The King of Kissingdom’ – with a chorus always guaranteed to inject some audience participation into the proceedings, bouncing and singing along – then in a similar Britpoppy vein, with a distinct nod to the 60s, a song which rejoices in the title 'If You Can't Live Without Me Then Why Aren't You Dead Yet?' Not a question I've ever asked myself, but one to bank just in case the need arises methinks.

We're a few numbers in now, the crowd is warming up, the evening has lost its cherry – it's time to introduce Spandau Ballet Steve. How does he know Jake and the band? Well, it seems like they might all be buddies/drinking mates from Brighton, and he played on the most recent album 'World Citizen'. A few of the feistier, hardcore fans up front are obviously going to have a pop, but Jake quickly jumps to his friend's defence – 'Leave him alone… Be nice… treat him like he's a virgin' – and that's the end of that. Besides, a minute into 'Telescope Moonlight Boy' and Steve is an accepted part of the band anyway. His sax again features prominently on the next tune, an energetic rendering of 90s Britpop fave ‘Girl A, Girl B, Boy C'. Jake supplies his own review of the performance – 'That was better than Live Aid'.

We continue on a pace with a couple of rocky numbers, 'Emerald Green' and 'Motorcade'…('All my favourite bands play B-sides at gigs')… and then the call to action (in pop musical terms anyway) that is 'World Citizen'. I've spotted a few of the band's official World Citizen emblazoned T-shirts dotted around and about in the audience, and the performance goes down well with the crowd, who look like they're on board with the message of the song. In fact, there are a few inflatable earth globes currently being volley-balled from one side of the hall to the other to smash that home. So in a sense (to inflate a metaphor to bursting point) we are indeed 'Taking On The World' – which is lucky, because that is the next song up, and it's delivered with gusto as always.

The musicians get a small breather while Jake riffs with the punters, and channels The Troggs. ('Girrrrl Thang - I think I love you, but I wanna know for sure…'). That is a not-so-subtle clue to what's next up on this evening's set menu – turn of the millennium MLS standard 'It's a Girl Thing'. The audience expect it, know it and love it - and do sing along, especially to the chorus, and Jake whips out his best Generation Game 'Brucie ending'. (If you're too young to get that Google it, or ask your grandparents).
We're on a smooth arc to the end of the main set now with the mid tempo 'Strumpet', 'The Penthouse In The Basement' and 'Sparkle' – the latter of which is always an audience sing-a-long arm waver. Jake is cutting down his Christmas list (with Steve again), and for 'Sparkle' he dons an appropriately rock'n'roll/cheesy game show host sparkly jacket - recently freed from an internship in a Southend museum, and also miraculously free of four-year-old child vom.

Then we're done - except we're not, are we? – and the band finishing and walking off isn't fooling anyone. You know you haven't really actually been to a My Life Story concert until they covered a few more of the regulars.

So why pretend? A quick face wipe and a gulp of water and they're back with and an extended four song encore. There's the ballady and REM-esque 'Sliently Screaming', and the suitably autumnal 'November 5th', which act as a thoughtful interlude before the explosion of recognition and poppy energy of '12 Reasons Why'. Then it's the recent, but already familiar, perfectly adapted concert concluding '#No Filter' - with its plaintive 1980s style fade outs, reminiscent of endings and goodbyes (sad face emoticon).

Don't know what happened to the inflatable worlds. I assume at least one mischievous imp smuggled one out and went off for a kick-about up the road to Angel.