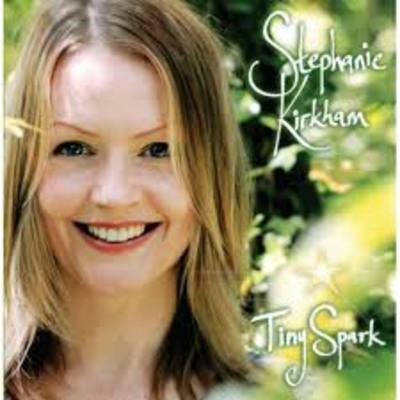 Stephanie Kirkham's new album 'Tiny Spark' was released a short while ago. She hasn't had much luck with previous releases, her label Hut/ Virgin folded a few months after her first album 'That Girl' came out in 2003. But I think given the right exposure and airplay 'Tiny Spark' could well put her deservedly on the ladder to success.

It is clear that Stephanie is a talented singer songwriter from listening to the range of songs on this album. It has a folky feel, jazz influences and great pop sensibility. But in addition to giving us earworms aplenty on this release she is also a talented artist and was once a very successful model.

"Easy As 1-2-3" and "Best Time Ever" two of the album's singles have been used in TV adverts and it is easy to see why they were chosen. They are among my favourite songs on this LP. I also love "Feeling Good", but it is rousing closer "Future Come On" that really blows me away. The album is co written by Stephanie and Phil Thornalley, with one track also co-credited to Ritchie St.John and six with Mads Hauge.

Phil Thornalley's production is excellent and gives the album a really good feel throughout. Phil has previously worked with Bryan Adams and Natalie Imbruglia among others I would defy you not to feel happy after listening to this record. I smiled throughout the whole listening experience! I politely order you to buy, stream, borrow or do whatever it takes to listen to 'Tiny Spark'!