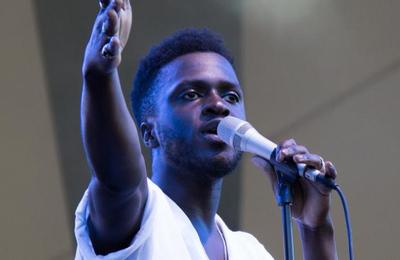 “My God, are you OK?” was the first thing I heard after entering the VIP terrace at Somerset House, London. “Yeah, I’m all good, I think? Why?”


“Both of your heels are bleeding like crazy!” She replied, startled by my seemingly relaxed answer. She was right. Looking down, my new pumps had caused such catastrophic blisters that my heels – and my new shoes – were soaked with blood. A trip to the medic and an encounter with Radio 1 presenter Clara Amfo started my evening, one of the Summer Series events, this time starring Kwabs and Raleigh Ritchie.

Newly bandaged and slightly limping, I ran from the medic straight to Raleigh Ritchie to catch his last few songs. Ritchie, AKA Grey Worm from Game of Thrones AKA real life Jacob Anderson, has been trying with this music thing for a while, moving to London aged 17 to further his career. Now 25, you can almost feel the passion and determination radiating from stage and across the historic venue.


Like a man possessed, the music gripped Raleigh Ritchie, tossing him across the stage, passing currents through his feet to move them in time with the accelerating drums. Your eyes were constantly darting from side to side to keep up with his movements. It didn’t matter if you didn’t know any of his songs. This was an emotional set – full of narrative, poetic words and gripping bridges which always seemed to climb up to intense heights, spurring on a new level of movement from Raleigh.


Bouncing from the drums to the crowd to the left to the right, ‘Stronger Than Ever’ fired him up with even more power, his feet unable to stay on the ground for more than a second, his face screwed up in some pained, desperate look. “I fall from the sky but I won't fall forever, I fall but when I'll rise I'll be stronger than ever,” he almost screams, casting a spell on the busy courtyard of the 250 year old mansion with a bought of shivers down our spines.


As dusk descended, filling the intricately carved walls of the courtyard with multi-coloured, fluorescent light, Kwabs appeared on stage. The London born 24 year old instantly oozed ‘cool’, his composed steps flowing as easily as water, matching his silky smooth vocals. It was effortless, in fact, this fluidity of movement as he seamlessly transitioned from song to song. A sexy cover of Arctic Monkey’s ‘Do I Wanna Know?’ gave the crowd a bit of fuel, energising the full courtyard, enticing us to join him with clapping our hands. That was it, in that moment, and from then on, Kwabs had us in the palm of his hand; the crowd was putty, ready to be moulded. Dancing theatrically, reaching his hand out to the crowd, Kwabs reflected the presence of many musical singers. He knew, expertly, how to put on a show.

Of course, ‘Walk’ and ‘Saved’, his far more pop-y and energetic songs, set the crowd off like fireworks. But the best moment, idyllically in the centre of the beautiful, grand courtyard, filled by red lights and the darkening sky, was a heartfelt rendition of ‘Perfect Ruin’.  Nearly whispering for some of the song, then unleashing an empowering burst of emotion, it was almost perfect in the setting. His jazz background – he studied it the Royal Academy of Music – becomes clear. Aside from his charisma on stage and his ability to get a crowd going, his technical ability to make music stands out proudly. It really is no surprise that Kwabs has already performed at Buckingham Palace to a crowd including Prince Harry.


As great musicians take time to master, the set really had it all: the love songs, the happy songs, the cry-your-eyes-out-while-gorging-on-Ben-and-Jerry’s songs. From stripped back, acoustic moments to full on, all guns blazing songs, it became clear that with such an intense, full-bodied voice, Kwabs didn’t actually need any of the five or six band members behind him. But, when they were behind him, complete with two backing singers, it really was dreamlike, hypnotic and, mostly, fantastic.