MacMillan Fest Puts On A Day To Remember For Great Cause 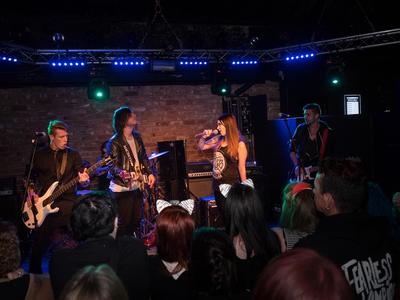 MacMillan Fest Has been around for quite a few years organised by "Kris Davies" who has raised a lot of money over the years. He made £6,000 from this year's festival, which isn't a surprise because it was so packed and the atmosphere of the entrance was great with many stalls including clothes and food.

Due to arriving at just past 3PM I decided to first watch "We Are Tyrants", I only managed to catch the last song which was a shame because I was enjoying the beefy melodic riffs and complex style. They had a shredding solo and beautiful clean vocals which had my ears dancing to their music. I was confused by 2 people on stage who weren't part of the band. I'm guessing fans? It is really awesome getting people involved but I felt that the one that was doing clean vocals, stood awkwardly and was ruining Ben Wright's vocals. The other guy was screaming and I thought he was part of the band. I wish I seen more from them.


Next I saw an extremely brutal band called An Empire Will Fall. They stood out with their 2 vocalists who both used varieties of harsh screamed vocals, blast beat drums, and dark heavy guitars with the occasional melodics whose tone needed some work. Vocalist Michael Hussey had a great stage presence getting the crowd to make mosh pits with people flailing their arms. The other vocalist Rhys Targett had problems with his throat which was only noticeable during low screams but he managed to power through the set with some really good high screams. Personally not my genre. The songs sounded a bit too similar but overall tight and very good at getting the crowd moving.


Straight after was a band called Famous For Nothing with an intro that sticks in your mind. They suddenly stripped off their shirts, which I thought was different and a great way to help remember them. You could tell these guys meant business when they pulled out a cover of "I need a hero" which was amazing. The mix had problems though. The snare sounding like a ping pong ball, over powered most of the set although luckily vocalist Sam Barson had stunning dynamic vocals that shot through the mix, with the other vocalist Aj Boulton getting the crowd going and moving with his clear, deep harsh vocals. Guitar tones sounded beautiful. A big cheer for a decent set, great job guys!

Then I started running about. First, Bluebird on the Spanky Van Dyke's stage, which was more of a chilled out band compared to others I saw. They had a great mix, with a bright guitar tone, wonderful funky bass lines, technical drums for a small kit and powerful dynamic clean vocals. There wasn't a massive crowd but they got a good reaction which would have been more noticeable had there been more crowd interaction.


I then ran back to stealth to see Cabin Boy Jumped Ship. They had backing tracks of synths that shot out of the mix and which kept them all tight. Their  guitar tones were spot on. Heavy but melodic at the same time. Lloyd Watson has magnificent clean vocals. It's a shame they have an auto tuned backing track. I personally hate auto tune especially when it's not needed, so I saw it as more of an effect.


They were one of the most energetic bands of the day with synchronized jumping and also jumping off monitors. Conor Peek had brutal screamed vocals that got some movement out of the crowd. The only thing I found other than auto tune was the fact that the songs sounded similar. I wish there were more different sounding tracks.


Back to the basement to see As December Falls, who were very energetic. There was a pretty decent crowd and a lot of interaction, such as clapping and waving arms. Simple effective lead riffs, unique vocals by girl vocalist Bethany Curtis which, when harmonised with Ande Hunter, sounded beautiful and different. Very punchy drums, although the mix was a bit bassy with a few feedback problems. This wasn't too noticeable. Great set.

Staying in the basement, I watched Lacey who are  chilled out with exquisite dynamic vocals by Graham Turner and lovely backing vocals from Josh Lewin with catchy lyrics with the occasional woah. They also did a brilliant cover of Jimmy Eat World. They had very bright and clear guitar tones. They did really well and tried to get the crowd moving but they seemed to be more there for Fearless Vampire Killers.


I decided to watch Eyre Llew next, who had a very different chilled atmospheric feel, with no bassist, playing guitars with a bow, drummer also playing piano, huge clean vocals. They had a lighting rig that also helped create the mood of the music which sent shivers down my spine with all the build ups and tension they created.


At the end of an awesome day was the band Evil Scarecrow. They had lots of props and awesome ideas. Their stage presence is probably the best I've ever seen live; giving the crowd party poppers and getting them to pop at the same time; Bassist doing a war march though the crowd; synchronized crab walking with a crab on stage; everyone getting orange gloves to act as fire. Just amazing ideas in such a ram packed room.


Even getting the organiser Kris Davies to eat a whole cake during a song. The sound and lyrics were just amazing. Stunning shredding riffs with heavy rhythmic riffs and technical drums. Couldn't have asked for a better headliner, finishing their set with an encore and finally a sing along to WhiteSnake. It was such an amazing day, can't wait for next year.


To find out more about MacMillan Fest click here.