<p>Bestival is a four-day music festival held at the Robin Hill country park on the Isle of Wight, England. It has...

Lovely End to Summer at Bestival's Summer of Love 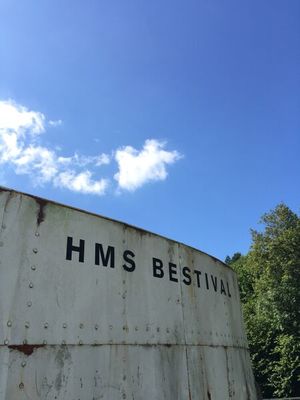 Coming at the end of the summer festival season, Bestival is a special four day event, and not just because it is the perfect opportunity for festival-attendees to immerse themselves in mud, music and memories one last time. For Bestival is a grand occasion of fancy dress festivities; this year, Robin Hood Country Park on Isle of Wight was transformed into the ‘third Summer of Love’. Though it’s not the easiest place to get to, this somewhat adds to its charm – it should be pointed out, too, that organisers do put their utmost in to makes travel as smooth as possible.

In the advent of any festival, it’s not hard to pick those out of a crowd who are that way bound but, on Thursday 10th September, those on their way to Bestival stand out much more than usual. Summer of Love themed outfits glimmering amongst the usual sleeping bags, wellies and the like; think paisley prints, love hearts and flares.

Thursday sees good weather, good vibes and general excitement. After setting up camp, Jamie XX’s set in the Big Top is the place to be to get your groove on. The Big Top is, surprisingly or not, huge – yet crowds group outside the tent to get a listen to what Jamie XX has to offer because there’s simply no room under the electric blue canvas. Inside, there’s no better way to describe the movement than a swarm of maggots. Though frustrating, the set and the mood is brilliant so it’s no real bother. Before Bestival has really started, the bar has been set very high.

Friday welcomes the sun once more and allows the chance to explore the sheer size and spectacle of the festival. Wandering through the appropriately named ‘Ambient Forest’, there is an abrupt opening which sees a huge open space; ‘The Port’. National treasure Four Tet is aboard HMS Bestival to treat Bestival-ers to an epic afternoon set. The atmosphere is wonderful, as those who would rather soak up the rays and chill out have the space to, whilst those more inclined to a mid-afternoon rave can also bust their moves.

Come evening, Tame Impala take to the Big Top for their set. There’s much anticipation for the psychedelic rock band and, whilst they play well, there’s something missing. The visuals are undeniably amazing and the crowd really gets into it, but Tame Impala’s presence on stage doesn’t resonate; it’s almost as if their explosion of popularity hasn’t yet caught up with their stage performance.

FKA Twigs follows on and, whilst it’s near impossible to compare the use of stage between the two acts, FKA Twigs puts on, as expected, an amazing performance. Achieving an admirable balance of mesmerising moves and compelling vocals, it’s a moment that’s undeniably a highlight of the weekend. Afterwards, Four Tet returns to the Bollywood Tent for an entrancing set in the early hours of morning to finish the day off.

On Saturday, Little Dragon take to the Main Stage for an energetic set before, later in the evening, Jungle put on a thoroughly enchanting show to warm up for the day’s headliner act.

The Chemical Brothers know how to put on a show. Playing some of the finest from their extensive repertoire, the pair stand small centre stage, dwarfed by the magnificent light show around them. Towards the end of the set, two gigantic robots emerge from the stage, with lasers beaming yet more light into the crowd for a phenomenal experience.

Sunday starts off drizzly, but weather-wise Bestival has been in luck so far; it’s not enough to ruin the run of good fun. Andreya Triana plays in the Big Top and is both hilarious and wonderfully talented. As she makes jokes and mocks herself throughout the set, whilst maintaining an air of professionalism in her performance, her heartfelt gratitude to perform to the equally grateful crowd shines through.

Later on, The Jacksons perform on the Main Stage for an inspiring life experience. Dressed in shiny suits, the foursome attack their repertoire with energy and light-heartedness, as visuals on the side screens offer the crowd clips of the band playing back in the days of Jackson 5.

Missy Elliot gets her freak on, and gets the crowd to follow (track)suit as she closes Sunday on the Main Stage, before a delightful display of Summer of Love themed fireworks resist being dampened by the now quite wet weather. Spirits remain high throughout both Mark Ronson and Skrillex’s respective sets and Bestival comes to an end.

Bestival is not a wonderful occasion just because it’s the last chance to attend a festival for the year; the genuinely wonderful atmosphere that shines through it and the energy put into making it an aesthetic experience not the forget makes Bestival the best.