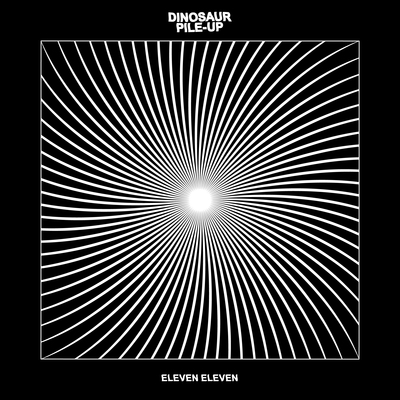 Dinosaur Pile-Up is the brainchild of Matt Bigland, who on previous releases has tracked every instrument in the studio himself. Eleven Eleven marks a change from this, with the current lineup of Bigland, Jim Cratchley and Mike Sheils recording as a full band for each track song.

Eleven Eleven opens with the title track and lead single, introducing a new, heavier sound. An excellent choice for a lead single and opener, 11:11 makes a strong case for Dinosaur Pile-Up as a force in the increasingly popular Brit grunge scene.

The highlights of the album are the songs that showcase the band's live style, as they intended with the recording process. ‘Grim Valentine’, ‘Anxiety Trip’ and ‘Bad Penny’ bring supercharged guitar riffs and an energy similar to that found in producer Tom Dalgety’s (Royal Blood, Turbowolf) other work.

There are less powerful songs on the record (‘Friend Of Mine’, ‘Might As Well’), but while they might not deliver overall there’s notable highlights in each (Friend Of Mine’s chants of ‘I can’t live without your love’ for example), and are still solid tracks.

Dinosaur Pile-Up have the formula for this record down perfectly, and so the final track comes as something of a shock. While it’s not the first time a band have chosen to end an album on a softer note, the calm Cross My Heart feels more like a seventh or eighth song breather. While a great demonstration that the band can produce great songs that diverge from their usual style, it seems to leave the listener on the wrong foot.

If there’s another thing that sometimes lets this album down, it might be the lyrics. Often clichéd (when the vocals are audible at all), their quality doesn’t quite match that of the rest of Bigland’s writing. But it’s a downside that’s easily overlooked: after all, this is not a sing-a-long album. This is a turn-it-to-11, headbang until you break your neck album, and again this is a reflection of their live show.

Eleven Eleven trades the poppy hooks from earlier releases for more riffs, more energy and more noise. While on reflection this is something of a shame, when listening to the record this loss is forgiven, so absorbing is this heavier, crunchier sound. If you don’t immediately want to get yourself to one of their shows having listened, you might need to get some new speakers.