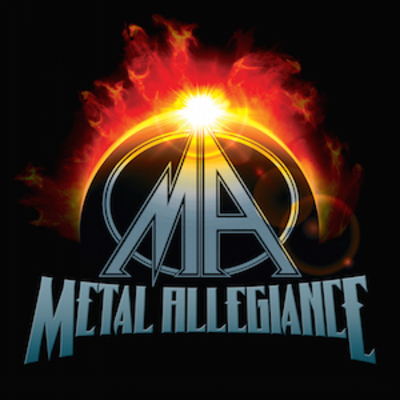 What started as an obvious gimmick seems to have given birth to a very successful publicity stunt. Metal Allegiance return with a huge handful of musicians waiting in the wings, all swearing a new found zero tolerance for cover songs when it comes to the brotherhood.

This all-star production is undoubtedly an unreachable itch to the many metal fans that follow the separate artists musical updates on a day to day basis, sparking a curiosity of just what can be achieved when the big names of Metal meet in one room. It is important however, for the sake of a fair analysis of this album, that the listeners try and forget the very fact that these are all well accomplished musicians so not to alter their perception by a popularity vote.

“Gift of pain” blends up the members of Exodus, Slayer and Lamb of God’s talents into a bitter mixture, filled with slightly predictable song writing and fairly monotonous melodies. A moderately slow start to the album.

“Let darkness fall” however, adds something to the collection which was a necessary component from the word go. Troy Sanders of ‘Mastodon’ adds an incredibly venomous atmosphere to the album (as well as the intense musical talent of the founding musicians), which is why it should have been considered for the opening track.

The anchored strength of “Dying Song” also emphasises that Mr Anselmo, (front man to the mighty ‘Pantera’) has lost none of his character when joining technique and emotion into his vocals.

“Cant kill the Devil” charges in on a flame engulfed steed after its misleadingly light-footed introduction. A Slightly predictable structure again, but forgiven after some tasty guitar licks and a very catchy chorus line.

With a deep bass line opening this one up, “Scars” reveals a strong duet in terms of harmonising and effortless pitches between Cristina Scabbia and Mark Osegueda. A slightly off-kilter ambience echoes between Scabbia’s notes and the music however, but is easily forgotten considering the strength of the song in general.

Matt Heafy (Trivium) makes his fairly disappointing return to the powerhouse concoction with “Destination: Nowhere”. Initially smacking you with what seems to be a hard-hitting crunch of exhilarating rock; his strained and somewhat diminished vocals reveal it to be nothing more than a wet flannel.

Doug Pinnick (Kings X) & Jamey Jasta (Hatebreed) however, change the tone by drawing a line between groove metal and euphoric hardcore with “Wait until tomorrow”. A reminiscent 90’s nostalgia washes over this track, bathing it in a defiant despair.

“Triangulum (I. Creation II. Evolution III. Destruction)” comes across as slightly misplaced in running order of the album. To put the instrumental accompaniment second but last song is a bold move, (especially when it would have been more suited to break up the middle section). Regardless of this, the three musicians who relentlessly give it their all in every track decide to concentrate on the musical aspect of Metal.

Alex Skolnick (Testament) starts up a few warm up laps with the relatively slow intro alongside David Ellefson (Megadeth) and Mike Portnoy (The Winery Dogs), before bursting into a flourish of clever off-the-rail song structure and mouth-watering guitar solos.

Taking its seat as the closing song, huge chants role in encouraging its listeners to metaphorically take the “Pledge of allegiance” and with Mark Osegueda (Death Angel) at the helm, the audience are set to experience strong vocals and a generous helping of 80’s stamped madness.

‘Metal Allegiance’ may lose some followers from the member’s reluctance to experiment within the field but that is not what the allegiance was created for. Its birth was to showcase a period of metal progression which should not only be remembered but included alongside modern day takes of the genre.