Clutch Categorize Themselves Under 'Psychic Warfare' 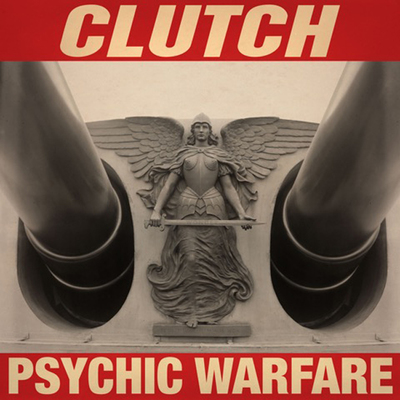 Clutch have always possessed an incredible speciality for defining themselves outside of association with said ‘similar’ acts. Regardless of being categorized on to the Stoner Metal and Blues/Funk rock bandwagon, they steadily became one of the central references for their unparallel sound.

With ten previously released studio albums, the four-piece have never been short of ideas or followers, regardless of critic credited highs and lows, and after listening to their new contribution, ‘Psychic Warfare’, it is apparent that they have also lost none of their groove.

All the elements of the classic Clutch are jam-packed into ‘Psychic Warfare’, including their narrative portrayals of everyday setbacks and fictional scenarios, but also the adept lyrical liar Neil Fallon’s ragged quality of bringing elegiac beauty and intensity of emotion into one.

Their recent release has more than enough potential for universal approval. With its episodic collection of witty lyricism clasping the emotional drive of their Southern swing and Texan blues, it doesn’t take a critic to realise how much there is to fit on one plate.

Standing as the adrenaline-paced milestones of the album, “X-ray Visions”, “Sucker For The Witch” and “Noble Savage” have an uncontrollable and undeniable foot-tapping energy which we have come to expect from the rock monsters of Maryland. A mix of topics smother these tracks including x-ray observation, an unhealthy obsession for the ‘witch’ of Salem and the “unapologetic lifer” vow taken by those living the rock and roll lifestyle.

The main contribution to the body includes “A Quick Death In Texas”, “Your Love Is Incarceration” and “Son Of Virginia” which record a collection of fictional romantic circumstances including comparing relationships to captivity, nights of passion torn asunder and catholic commitments to the day of all Saints.

To successfully dissect this piece however, the slight anomalies must also be documented among the high expectations/results. It is a rarity when an album goes without ‘the ugly duckling factor’ and in this case, “Decapitation Blues” sticks out like a sore and comparatively monotonous thumb.

With references to a “congress of corpses”, discharge from some form of observation and discussing forms of reanimation being a farce, the song indicates possible prison time or even hospitalisation. With the subject matter being moderately morbid interpreted in either manner, the song would have been better received played in a similar blues/country style to “Son of Virginia”.

‘Psychic Warfare’ is sure to bring about a new wave of listeners to Clutch’s doorstep (as well as keeping their current ones entertained). They have come a long way from their modest beginnings of meeting in high school, in addition to the sound they first coined, and still have a lot of adaptability to bring to their table before they call it a day.