The Hell Insist You Lose Your Shit In 'Brutopia' 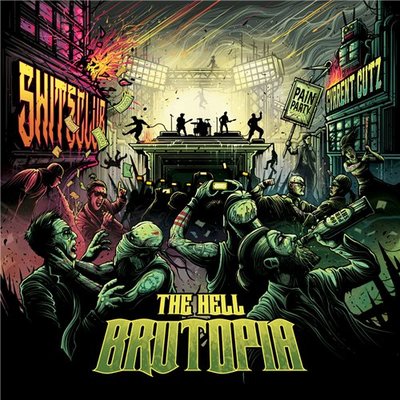 The Hell is a band unlike any other. When it comes to commanding groove metal, strong hardcore song structure and a wickedly amusing use of vocabulary to ram as many swear words concocted by the English language as humanely possible into one album, they have it all.

The Watford five piece aggressively force a red hot rock poker up the arses of the self-destructive supporters of club culture, repetitive radio station bile and the on-going competition between modern metal heads of who can tune their guitar to the deepest note before the strings fall off it.

Taking their audience on a wickedly miscellaneous off-road expedition through their nonsensical utopia known as ‘Brutopia’, they soon learn that the common cold has been replaced with TheHellYouDick fever (an extremely infectious sickness which musically overwhelms the victim), which compels them to mentally mutilate the same old mind-numbingly boring bastard way of writing an album.

The lyrics are absurdly comical and thought-provokingly real-to-life, covering common topics of today such as the ridiculous fashion trends rearing their ugly heads such as the well-known obsession with facial hair. Lines from ‘Just Curious’ include, “Even my cat’s got a fucking beard, we need to stop that shit”, bluntly illustrate just how tedious and exhausted the trend has become.

“One More Time” opens with a lethal barrage of bouncing groove notes and the vocalist known as NAIL$ maliciously screaming “We’re back!” and he is not wrong. An uncontrollable wave of well-placed beats washes down the listener’s ear canal where the guitars unmercifully lash out with big riffs and well-timed chord changes, making multiple incisions within the ear drum, slashing it just large enough for the vocals to find their grip and rip the walls wide open with a blast of guttural shrieks. Word to the wise, prepare for an imminent ear appointment.

“I’ve Got Loads Of Money” blisters the brain with incessant crowd shouts that make you appreciate the fun side of Rock n’ Roll, while “The Fever” follows suit in a similar manner, explaining the truly twisted beauty of TheHellYouDick Fever and its communicable chorus line.

“Shite Club” is a demonic examination into the seedy and exploitative life of clubs and the rats that believe it to be a Saturday night necessity. A line that sums up this illusionary top-of-the-walk lifestyle perfectly is “Let’s step this up a gear and move on to the VIP lounge, hang on, its exactly the fucking same as everywhere else in this shithole”. The point is made and unfortunately proven.

Tracks that are a little more deliberate with their prodding and poking at certain aspects of humanity include the theatrical interludes like “Gather Round” and “DH1 Classic Albums”, which carry a dry and typically British sense of humour throughout.

The band have always had a habit in the past of metaphorically walking up to their subject matters face, smashing it in the mouth and then having to spend the afternoon picking broken teeth out of their bloody knuckles, and this album is no different. ‘Brutopia’ has the capability to reach venomously intense highs and nightmarish lows, while being ironically hilarious at the same time. Good, clean fucking fun.