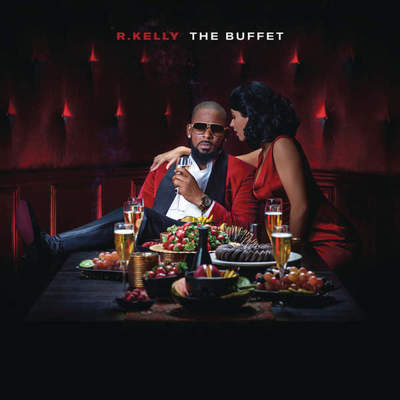 To many, Robert Kelly (or better known as R Kelly) was, and still is, the ruler of R&B music. The adaptable singer owns an impressive back-catalogue of a whopping twelve studio albums, that are recognisable to anyone who has been on the scene since the early nineties of “Honey Love” and is also a heavyweight producer, for some of the largest acts that entered the stage, including the ‘King of Pop’ Michael Jackson.

‘The Buffet’ is his thirteenth concept album to date, which is nothing short of a multi-genre smorgasbord of Hip-Hop, Rap, Pop, Soul, Jazz, Noir and Contemporary R&B. With Eighteen tracks to choose from, some would think it is simply an example of the smugness the artist has for his own skills, but it seems that this pride has not gone completely unfounded.

Although the easy on the ear lothario seems to have followed suit with the subtle but radical Rhythm and Blues adaptation that is sweeping modern musicians today, he has luckily retained his hair raising singing technique through a number of tracks, which still possesses the figurative capability to melt chocolate and transform the tension of any situation into an intimate escape.

“Get Out Of Here With Me” is nothing short of a luxurious throwback to the nineties, when the artist was reaching the pinnacle of his sound and shows off more than a healthy portion of his soothing singing voice.

“Wanna Be There” is a PBR&B duet between him and his daughter Joann Kelly (recently adapting her stage persona, ‘Arriraye’) who features on the track alongside her father. The duo delve into R Kelly’s music career and how he had trouble being a presence in his children’s lives, leading to tears being shed and family relationships suffering.

There are however, downsides to the singers new collection of recordings. “Backyard Party” is unfortunately a clear illustration that you do not need well-written content to create a popular track, all you need is a catchy melody and an interesting music video to take the attention away from the mundanity of the music.

The video released in August included golf carts, expensive cars, mansions, hats embroidered with the track title and a small army of scantily clad women. A classic stereotype of any Hip Hop music video, but also a huge example of First World showboating, which has had its moment under the spotlight, but is now simply interpreted as an extension of an artists financial and moral worth.

This new release could have also admittedly done well without the opening and closing tracks, “The Poem” and “Barely Breathin’”. The spoken introduction of “The Poem” is enough to make your stomach churn, with R Kelly’s vivid description of his metaphorical fuck fest. The Chicagoans subject matter has also always been recognisable through its constant sexual stimulus, but this track may be a step too far. Whereas “Barely Breathin’”, with its first use of a band throughout the entire album, sounds like it belongs on a country rock disc.

‘The Buffet’ is a well-written (if not slightly cringe-worthy) addition to Mr Kelly’s monolithic presence within the world of music, but an unnecessary call to branch into so many sub-genres in order to keep the people happy. An artist should be influenced by what motivates them and should never be influenced by what their contemporaries wish them to be motivated by.