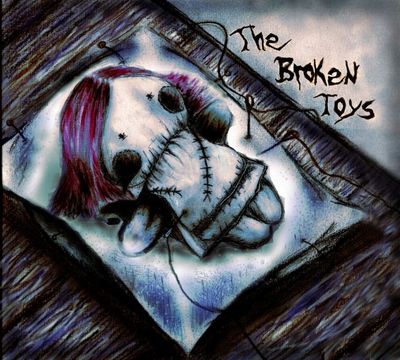 This is such an accomplished album it is hard to believe that it is only the second album from this Yorkshire band. Bad Pollyanna's website states that they represent a mix of beauty and darkness and it is clear that "The Broken Toys" has both in abundance.

There is a very definite Bad Pollyanna sound and it is not easy to slot this talented group of people into a specific genre or box so I won't! The nearest comparison that I can give would perhaps be Evanescence but Bad Pollyanna are also very much out on their own.

Olivia Hyde's soaring vocals can be angelic and powerful. The opening track "Define Me" showcases her rock goddess ability whilst album closer "I See You" perfectly illustrates Olivia and the band's softer side.

The other band members are Nikki Kontinen (bass), Stephen Kilpatrick (guitar) and Valerian Adore (drums and percussion). They come across as a very talented group of musicians who could successfully grace any of the best of the UK's festivals. I would certainly pay to see them having now listened to "The Broken Toys" three times in just over 24 hours.

The stand out tracks for me are the previously mentioned "Define Me", "Ugly Love" which showcases the band's light and dark elements and "Hooks". But my favourite song from the album is without a doubt "Pull The Trigger". The production on the album is excellent and stands out particularly on this track. Lyrically "Pull The Trigger" is the best on an album which is full of great lyrics.

I strongly recommend that you make this album your first purchase of 2016. Finally I would like to commend the band for their strong support of the Sophie Lancaster Foundation.