Politics is much better with great guitar chops 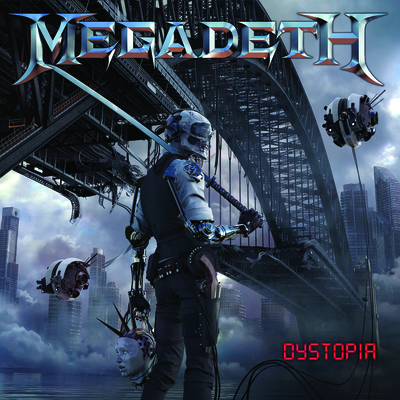 There are times when Dave Mustaine reminds me of Frazer from Dad's Army. Whether the White House turns red or blue, you can usually count on there being a few songs on a Megadeth album telling us: "We're doomed!"

This being an election year Stateside with primaries in full flow, there are a lot of such songs. The familiar themes of distrust of the powerful and concern about where the world's headed are at their most compelling in the title track (which also, of course, boasts some wonderful headbanging riffs), the spine-chilling 'Death from Within' and the more general 'The Emperor', which is probably about a politician, but everyone knows somebody like that so it should work well live. However, 'Lying in State' does not live up to the wit of its title and is lyrically more akin to a Republican primary with vodka-spiked water bottles. Just as well that there's some supremely heavy drumming from Chris Adler in that song to concentrate on instead.

The musical ideas, after all, are what really make this album. If 'Super Collider' was Megadeth in a similar place musically as Saxon were in the mid-to-late 80s, 'Dystopia' is Megadeth re-energised. To continue the parallel with Saxon, a bit of power metal influence has also contributed to Megadeth's new awakening. Kiko Loureiro's clear tones and classical skill, honed in Angra, add fresh vitality and an element of melodic finesse (check out 'Poisonous Shadows' for the most shining example), while the speed and heaviness of the Megadeth we know and love has roared back to life to balance it.

It's highly appropriate that the album ends with a cover of a punk song (Fear's 'Foreign Policy'). The choice fits perfectly with the album's general theme. The band's neck-snapping take on it also shows why, even if you're not into politics, don't agree with Dave Mustaine's worldview or just find it depressing to be told over and over again that we're doomed, there is still something to be gained from listening to this album. Megadeth are the metal embodiment of a punk principle articulated by The Clash in 1982: that all public service announcements should be made with guitars.