Tell Me It's Real

Seafret - Tell Me It's Real 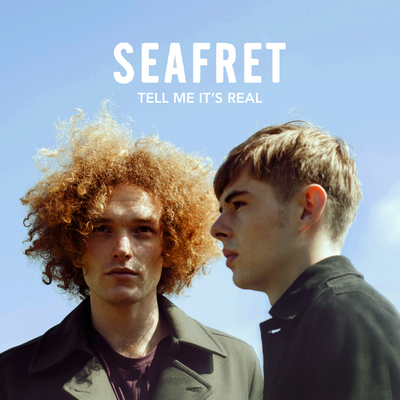 Tell Me It's Real

Bridlington, a traditional seaside spa town in East Yorkshire and about an hour or so drive from my own house, local and charming, and yet can be wild at times when the wind whips up a storm and the mists and frets drift in from’t North Sea.

Two local lads Jack Sedman and Harry Draper met at an open mic night and hit it off straight away forming a two piece band, which naturally they called ‘Seafret’, a pun on guitar frets and the sea mists, and for the past few years they have traded their wares in the pubs and clubs of nearby Yorkshire towns.

Spotted and signed by Columbia, now they have stepped up to much bigger stages with support slots for James Bay, Hozier, Kodaline and recently being part of the Communion Presents:New Faces tour.

In 2015 I witnessed them on stage at Glastonbury just before Drenge and Wolf Alice played their not so secret sets in a packed tent, and squinting through a Glastonbury haze you would swear at times you were witnessing a 1966 Simon and Garfunkel performance, Sedman with his tall wire-haired Garfunkel stature and Draper playing the Paul Simon role.

So it’s their first album, and it contains many maritime titles such as ‘Oceans’, ‘Atlantis’, ‘To The Sea’ etc. and you can really smell that sea air and feel the breeze throughout these songs, acoustic wave upon wave of Draper’s gentle guitar and impassioned vocals from Sedman.

Their music here nestles nicely in that alt folk slot, there are shades of Bon Iver and those softer Coldplay or Kooks moments come to mind several times when I’m hearing ‘Missing’ or ‘Atlantis’, but it’s all eminently listenable throughout.

‘Oceans’ is still the crowning glory for me on this album, a wonderful crescendo and great use of space, ebbing back and forth with Sedman delivering a high pitched lyric with atmospheric perfection. It builds anthemically only to abruptly desert the listener midway, and it deserves to be played over and over again, love it!

Another highlight is 'On To The Sea’ where they enlist some help from 18yr old Rosie Carney (watch out for her), to blend her tones with Sedmans and the result is a gorgeous folky tune, very sparse in nature with only the gentle strum of guitar in the background, but the blend is a natural one.

In short, ‘Tell Me It’s Real’ is a truly captivating debut album, full of the highlights of Seafret’s earlier EPs, and some new songs added, deserving of more than a casual listen, it is honest, distinctive and very real.