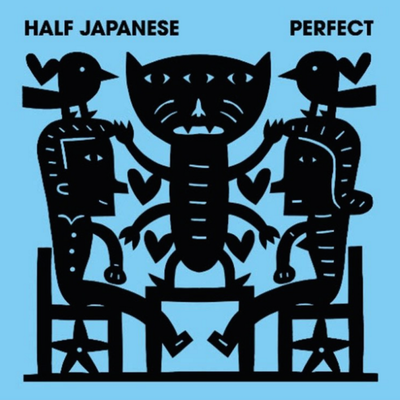 I have somehow managed to miss Half Japanese since they formed in 1975 so I am coming to these Maryland Punks very late, but also very fresh.

The first thing I noticed when listening to their new album, 'Perfect', was the almost wistful quality of the music. These aren’t angry old men trying to pull off the angry young men act as some acts do. They aren’t a group trying to replay old glories. They are a group who have developed hugely in the last forty years but they are continuing to develop rather than fall back on the old tropes.

There’s a Talking Heads vibe to a number of the tracks, especially "Hold On" but even then the songs remain their own creation. The lyrics are insightful, as you would expect from songwriters who have so much experience, but they are also positive.

In "Man without a Shadow", my favourite track, they proclaim ‘I have no use for that, got no time for that. Gave it up years ago.’ The drawl in which those words are sung are reminiscent of Bob Dylan at his most accessible and, I feel sure, the great man would quite happily give a tacit nod at the quality of the lyrics. It’s easy to see the words as a reference to their past which they clearly won’t be in thrall to, but as with many of the songs it will speak to each listener individually and be relevant to many situations.

Is the album perfect? Of course not. There’s no such thing, however close some groups have got. It is, to these new ears, pretty damn good and it has encouraged me to delve in to their past to see what all the fuss has been about.