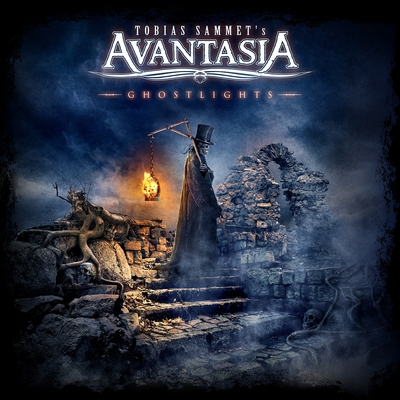 Countless technology writers talk about the importance of the "Aha moment" where somebody starts to get the point of what you're offering. On paper, Avantasia should have appealed immediately to me: they have clear guitars and vocals, complex structures and build albums around unusual concepts. Yet I saw them at Wacken in '08 when I didn't know any of their songs and couldn't make head nor tail of what I heard. However, as I listened to 'Ghostlights', slowly certain ideas from different songs started to link together. Then following the lines of reasoning, they touched on other topics. So that's what they're about! Aha ...

What they're about, mostly, is science and its implications for mankind. Where once power metal could be caricatured as full of songs about dragons, science is now widely seen as the new emblem of glory or peril, depending on your perspective. Tobias Sammet is on the pessimistic side of this debate, painting a dystopian future where some mad planetary engineer seeks to manipulate time. The recurring supernatural imagery throughout the album sits oddly at first, but a ghost is supposed to be someone who is resisting the fact that time has stopped for them. The album could therefore be seen as a struggle between romanticism and rationalism, with the protagonist eventually pronouncing in favour of the former.

Naturally, a story with such an intricate plot gives ample opportunity for Sammet to incorporate a wide range of song styles and the long guest list Avantasia fans have come to expect. Most of the time the songs fit closely with what you would normally hear from the guests in their regular jobs (epic, concept-laden heaviness from Marco Hietala, deeply emotional balladry from Sharon den Adel, menacing prog-metal from Geoff Tate), although Dee Snider, accompanied by suitably creepy backing vocals on 'The Haunting', sounds for all the world like he's channelling Alice Cooper.

If you want lovely high-speed metallic riffing and soloing, then 'Babylon Vampyres' and the title track will make you very happy. For fans of long epics, 'Let the Storm Descend Upon You' will absorb your attention all the way through.

'Lucifer' is a stunning song when it gets going, the moment when it kicks into gear hitting you like an unexpectedly switched on lightsaber. And if you like power ballads where Sammet gives more than a nod to Meat Loaf, the album shows time coming full circle by beginning and ending with them (with a fade-out at the last: is that supposed to signify that time has not stopped, or will there be more of this story?).

Tobias Sammet said in an interview that he was really proud of 'Ghostlights' because "Every minute of it sounds like Avantasia". In this, he is largely correct. Because Avantasia has always had a varying line-up, there are many ways for them to sound like Avantasia, but there is still considerable coherence to the album. That in itself is testament to remarkable skill. And the talent that has gone into 'Ghostlights' is what finally made me get Avantasia after listening to this album. About time too.