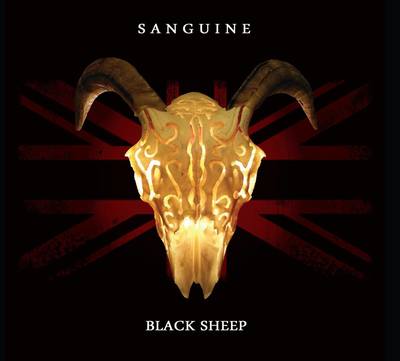 Sanguine, what a great name for a band that is. The dictionary definition is something like "optimistic or positive, especially in an apparently bad or difficult situation". This is very much an album that made me feel good. It certainly makes me feel optimistic for the future of rock. Sanguine also means blood-red in the context of heraldry, that certainly has a link to this album given that at full volume it almost made my ears bleed, but I do mean that in a good way.

If you can't afford to pay your electricity bill then I suggest that you borrow 'Black Sheep' pronto. Then play it at full volume or beyond. This band generate so much energy they could power a small country for a week or two!

If you like your rock damned hard and melodic then you will love this album. However if you like it with a softer edge then there is something on here for you too. The best of the harder songs for me are the title track, "Black Sheep", "Breaking Out" and "Social Decay". But if you're looking to feel more chilled then check out the sublimely gorgeous and anthemic "Breathe Out" and "Whole World".

I defy you not to sing along to the latter. "Pretty Girl" has the potential to be a massive hit too and it is ably supported by an excellent video shot in Las Vegas.

Indeed not only do this band want the whole world, it looks like they are starting to get it. The album was recorded in Gothenburg, Sweden. They have recently played in Ibiza and LA and been to Berlin. The album is scheduled for a European wide release at the end of January. It will also be issued in Japan.

This is a band that really knows what they are doing and where they want to go. Tarin Kerrey's vocal power and range is immense. She sings like an angel, but still projects devilish joy. Nick Magee's guitar playing has clearly been created in heavy riff heaven. Driving and underpinning this awesome collective's wonderful noise are the mighty rhythm section of Matt Feld on drums and Ross Andrew on bass.

My money's on this album propelling Devon's finest rock band (actually the geographical accolade probably goes much wider than that) into the next level. They deserve to be playing big stages and I for one am looking forward to seeing them on those stages.