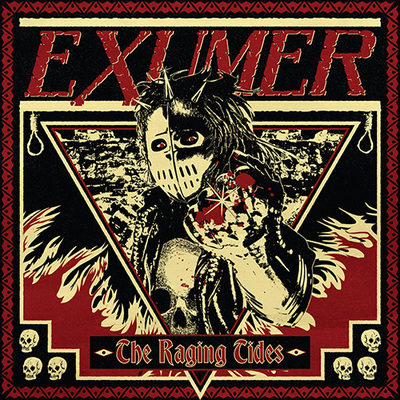 These battle-scarred veterans have been a difficult name to ignore when discussing topics such as German metal music and bands that had suffered a lengthy degree of the hiatus status. When ‘Fire & Damnation’ was unveiled in 2012 however, it went to demonstrate the group had not strayed far from the path in their time away from the project and eagerly began reminding music how the thrash genre has remained untarnished from sub-branches for a prolonged period. 2016 has arrived, and with it comes Exumer’s brand new album, ready to recap the ruthless temperament of the persistent genre.

Their twelve track leviathan titled ‘The Raging Tides’, is littered with sharp stabbing notes and rapid drum fills with recognisable heavy fret mashing bringing up the rear. The chug and shred techniques that most artists use in fanaticism today have defined the genre from its infancy, but are undeniably a vital organ in the thrash metal body. Mr Stein shortly unleashes his furious animosity from the speakers with a studio echo effect added, creating a titanic presence.

“Welcome to the hellfire” is one track that holds all the intensity its title implies and instantly grabs your attention. A huge guitar slide unzips Pandora’s Box and unleashes face-shredding riffs, titillating guitar solos and the horrific reality and everyday life of those suffering from human abuse. Lyrics that perfectly encapsulate this are “exterminating your life, decimating all in sight, death.”

The genre strand is undoubtedly ageless, but surprisingly difficult to evolve from its classically valued definition. This thought alone should be enough to explain the correlation between the commanding respect the group receive and their tenacity towards a genre they know, refusing to break away from their deep-rooted addition to thrash and suffer the irritating identity crisis that most artists eventually use to resurface their own career.

The group’s motivation and fuel for their new album burns through brimstone and brutal truths about day-to-day torment. Examining ferocious cycles of governmental corruption and vicious foreign powers exercising no mercy, the front man bellows out to the powers above who wish to keep these topics under wraps that “we are out for blood, with Satan on our side”.

‘The Raging Tides’ was bred in the thorn-infested womb of Thrash metal and should be considered a pure interpretation of manic glorification and anarchistic ensnarement.