Not absolutely good or bad 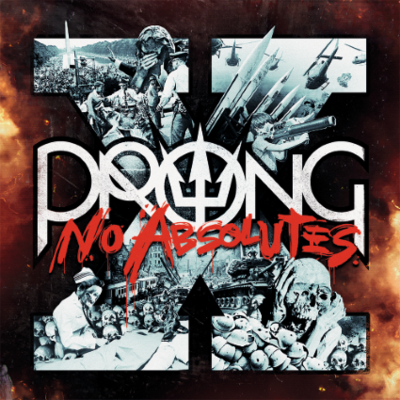 There is something odd about an album proclaiming on its skull-filled cover that there are no absolutes. After all, isn't death an absolute? The album stays firmly rooted in this world, which would appear to suggest so.

Prong are often described as an uncategorisable metal band, but individual songs here can often be clearly categorised. 'Sense of Ease' and 'In Spite of Hindrances' are quite obviously thrash, while 'Ice Runs Through My Veins' and the anthemic 'With Dignity', both quite accessible in terms of lyrical themes, are clearly industrial and underline Prong's influence on modern metal.

Much of the rest of the album comprises the sort of high-energy numbers showing off Prong's talent for stringing a limited number of notes into a catchy riff. This will be what those whose first exposure to Prong was from airplay on Bruce Dickinson's much-missed radio show would recognise as "typical Prong", if there is such a thing.

That said, there is one number, 'Do Nothing', that is quite unexpected. The accompanying blurb bills it as the closest thing to a ballad you'll ever hear from Prong. Whether you agree with that probably depends on whether you think Pantera's 'Cemetery Gates' is a ballad, because there is still some energy to 'Do Nothing', just not as much circle pit potential as the rest of the album. The theme is not emotional, but still likely to resonate with many: that you have to take risks if you want to achieve anything.

Lyrical themes that can easily be picked up and retained are, however, the exception. Tommy Victor has said in a recent interview that he wants fans to read the lyrics. In most cases, they'll have to do so to have any clue what the songs are about.

The track listing is arranged with the most comprehensible songs towards the end. This could indicate a direction of travel that might upset purists. Conversely, it could be the band being deliberately awkward to encourage listeners to stick with the album, although that may not work in the age of shuffle mode and downloading single tracks.

And yet, downloading single tracks may be the best bet for the casual fan. Prong's status as an "influencer band", rather than famous in their own right, is down to the fact that much of their output is the aural equivalent of Robinson College, Cambridge. Architecture geeks marvel at the elaborate building techniques used on Robinson, but to the non-initiated, it just looks like an endless mass of bricks. 'X - No Absolutes' is not so absolutely featureless, but nor do enough tracks stick in the memory to make it an absolute must-have.