'All In Time' Keeps Stone Broken Under Surveillance 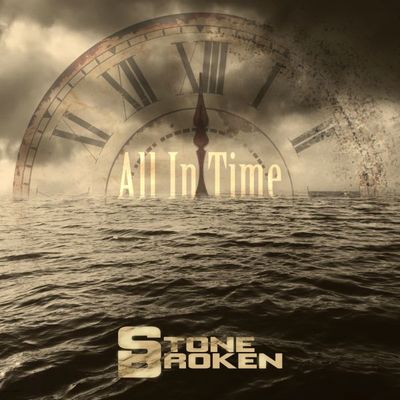 Some music takes a long time to officially generate a cult status following, but when discussing the hard rocking Stone Broken, it goes to show their value when it has only taken them a short three years to gather a fairly substantial fan base. Although they are still pretty new to the playing field, their debut release, ‘All In Time’ goes to show that close eyes need to be kept on this particular English act.

For those who have experienced the music of both artists, it is almost impossible to assume that Rich Moss of Stone Broken and Tyler Connolly of Theory of a Deadman are incomparable. The frontmen not only share a singing range but also a favoured pitch which is shown throughout ‘All In Time’. Nevertheless, this is not being broadcast as a hindrance, but merely a comparison of where the singer may have gathered his own influence from. To quote the Canadian cartoonist and publisher David Sim, “Once a profound truth has been seen, it cannot be unseen”.

The majority of the bands tracks follow a rhythm pattern in between Andantino and Allegretto tempo speeds, which is just enough to keep the heads steadily rocking with no lobe damage to follow. Although the vocal style was admittedly unexpected, the opening track “Know your enemy”, opened up with an unconventionally dynamic hard rock verse and chorus. What was expected to blast out of the speakers however was a high-pitched singing voice that would have a scratchy sandpaper quality, but is instead given a dry and fairly middle-key singing voice with this thick mist wrapped around it which left lingering thoughts of a steady means to an end.

This assumption however was quickly eradicated when the ten track release revealed its hidden gems in the form of the elevating ”Better”, the reminiscent “Be there” and bitter sweet “Wait for you”. The Lyrics may revolve around generic combinations of how to never waste the time given to you, commitment and musing over memories but the content itself does mention common messages which should not be taken for granted such as “Stop wishing your life away”. Maybe a little too obvious but when it is also interlinked with the musical arrangement, the songs structure works well as a full sound.

The Walsall quartet’s 'All In Time' may have a few corners and crevices that need dusting in order to perfect the next step, but this is most certainly a group that should be kept under surveillance for future referencing and re-evaluation.