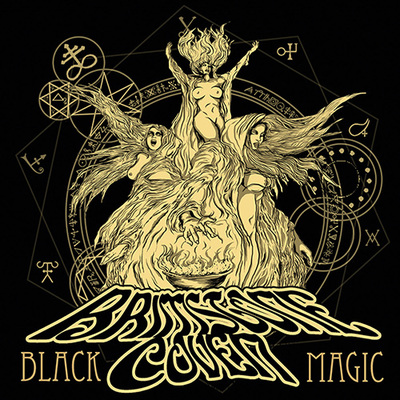 Brimstone Coven are a new band to me so my first listen is entirely without any fore knowledge. In the corner of my notepad from that listen is the question "Birmingham?" They're not from the capital of heavy rock, they are from West Virginia, but this album is pretty much a tribute to a time and place.

If a blues, folk or country artist is congratulated and revered for their understanding and emulation of a genre's tradition, if they are classed as authentic, then why not apply the same for a band doing the same for classic rock? There's nothing new here, no musical boundaries pushed forward or modern interpretations of a previous sound, just pure 40 year old rock. This could be a collection of recently discovered unused Deep Purple or Black Sabbath tracks but who cares? We'd love it if Purple or Sabbath did discover and release tracks from the day but in the absence of that this is the next best thing.

It's all by design. Every facet is used on this album - the symbols and semi-nude female figures on the cover; the heavy occult song titles, the band's name for Beelzebub's sake.

So what of the music? Straight in with meaty hand banging Sabbath stuff on 'Black Magic' and 'Black Unicorn' and the foot is in full stomp by the time we get to 'Beyond the Astral'. 'As we fall' starts to slow things up a bit before 'Upon the Mountain' goes into a much tripper direction with multiple vocals, a much more mournful sound that does indeed climb to a guitar solo of a peak before descending the other side to merge summer of love vocals with a hard rock guitars.

Psychedelic overtones also introduce 'The Plague' with it's horsemen ride on demon steeds before it builds and after a few minutes the horsemen appear to be calling out your name.

The album takes us back to several eras. Musically we are in the heavy rock of the early 1970s interspersed with some mid sixties tripiness, atmospherically we're in Christopher Lee witchcraft country. For fans of heavy rock they really are calling out your name. You have been warned.