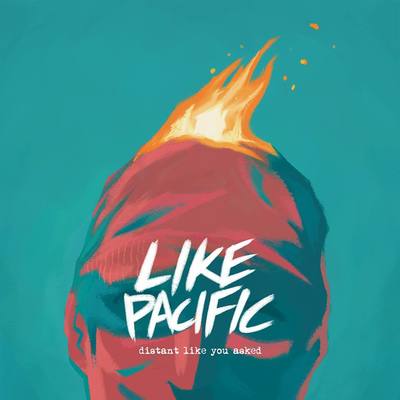 Like Pacific have released a number of EP’s through their past as a punk quartet, leaving the question unanswered as to when they would release their first full length album. After a number of years however, their debut has finally arrived to inform you of their own personal ordeals in the form of ‘Distant Like You Asked’.

The timing for their release could not be more perfect regarding the genres current popularity (especially among the younger generation). With a lot of attention focused on rising acts such as Neck Deep and The Story So Far who wave the same banner, there is huge hope for ‘Distant Like You Asked’ to get noticed in a pretty big way.

Pain-stricken belting vocals are spread like butter over the Toronto-born 10 track power pop piece. The opening track “Richmond” comes in fast, leaving a strong after-taste in their fans mouths and gives them a rich example of the remaining album content to come.

Other tracks that burst with character include “Commitment” and “Worthless Case”, both examining the poisonous nature of certain individuals and how their very presence can have a seriously negative effect on their surroundings, leading to lines such as “I never thought that human contact would create this wasteland” and “am I distant enough to waste your desperate taste”.

On one hand the happy-go-lucky vibe flowing through the music leaves the listener pondering over how the group’s music style could be thought of as slightly hypocritical compared to the ominously observational lyric writing that they are attempting to expose. On the other hand however, this concept of mixing meaningful lyric material into an adolescent instrumental collection is not exactly new to the field.

It can be argued that the majority of the lyrical body concentrates on topics which people will inevitably experience at one point in their life. With that in mind, the music accompanied with the subject matter makes it partially aimed at a generation who might need warning of what could come from around the corner and schooling in making the right decisions from personal experience.

‘Distant Like You Asked’ reveals itself as a great case study on the integration between emotional education and the satisfaction of a musical distraction. An album that acts as a bitter-sweet reminder, but also an erected middle finger to every toxic encounter and heartbreaking moment you have ever had to endure in the past.