Times of Pride and Peril

Not 'Raw', But Cooking With Gas 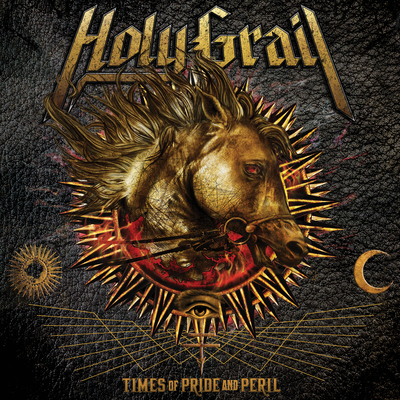 Times of Pride and Peril

Definitions are funny things. James Paul Luna is on record as saying that the new Holy Grail album has a really raw sound, because his idea of raw is anything that doesn't sound like too much was done to it in production. In that sense, he's right. Yet in a rock scene where too many garage bands who can write a riff but not a song have had their 'raw' sound hailed as 'the next big thing' for a month or so before deservedly fizzling out, Holy Grail's new album does not sound raw. A lot more thought and effort has gone into it than that, and so much the better.

It is also interesting to note that Luna reckons his guitarists have the most modern influences of anyone in the band. Certainly the middle portion of 'Times of Pride and Peril' is full of modern metal hallmarks, displayed to best effect on the hook-laden 'Apotheosis', but some of the greatest guitar work on the album is resolutely classic-sounding.

'Waste Them All Away' has perhaps the most stunning riff on the album, while 'Pro Patria Mori' takes up a theme pretty much every metal band has used - the battle cry - but delivers it with enough panache to conjure up visions of fists pumping and fans singing along in a live setting.

The most consistently modern element of Holy Grail's sound is that whatever era the guitar sound calls to mind, it always meshes with distinctly contemporary double kick drums. The other half of the rhythm section is less prominent most of the time, although there is some bass to the fore in 'Sudden Death' and especially in the beautiful instrumental passages of epic closer 'Black Lotus'.

The one thing that is undeniable from the advance press about this album is the power metal vocals. As Luna is American, Iced Earth naturally loom large in his conception of power metal, as echoed by the fact that this is the third album in a saga telling a dystopian story of Holy Grail's own invention.

There are, however, hints of continental power metal too, such as Grave Digger (mercifully minus the bagpipes). He even tries a few harsh vocals to finish the album: the best that can be said about that is that it's a very effective device for obscuring whether the tyrant actually falls in the end.

So how should such an album be described, if it's too complex to be 'raw'? Authentic might be the best way to put it. There's a sense that 'Times of Pride and Peril' will translate easily from studio to stage. Now, since Holy Grail have not been frequent visitors to these shores, the next question is, when will we find out?