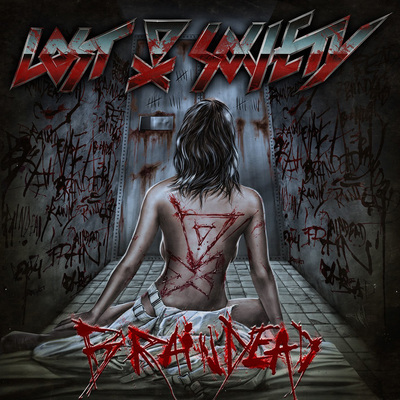 Lost Society have built quite the reputation for themselves over the last few years in the Finnish Thrash sub-genre and have revealed that their 3rd album, ‘Braindead’, is just as ruthlessly wild as their previous work but with an added touch of maturity.

This unexpectedly short eight track is no small feat as the groups strengths lie in their ability to differentiate from one solid timing pattern (which is not very common among their genre influences), every track accompanied by a flood of pure guitar solo ecstasy and the drums being fairly untouched in regards to digital studio editing, leaving them clear but not overwhelming to the overall sound.

First track in, is “I am the antidote” which holds a sinister neoclassical introduction followed by steady chugging motions and Mr Elbanna’s elevated high pitched shrieks. This opening track acts as a perfect example of how apparent the tweaks they have made are to their music, leaping into a more traditional style of Thrash while retaining a level of their modern melody.

The track finishes on a fade out but then immediately sends the listener down a big bass slide and straight into the anthem of mayhem titled “Riot”. Embracing contemporary heavy metal, this song infuses forms of anarchistic Punk into its veins with energetic verses and an arm-pumping chorus.

“Mad torture” opens on a sample track of a crazed executioner starting up a roaring chainsaw while the victim screams in panic. Although cheesy samples such as this are a gimmick at best, the following flurry of crunching chug notes and finger shredding solos is more than enough to make the hairs on the back of anyone’s neck stand on end.

Opening with a slightly uneven time sequence, “Hollow eyes” soars swiftly into hair swinging bedlam. The album itself has somewhat little breakdown space as the majority is eaten away with lengthy solos, but this particular recording is littered with earth shattering instrumental breaks as well as a guitar solo sharp enough to shave with.

“Rage me up” and “Hangover activator” eventually engage the pace factor that most veterans of Thrash would likely have been waiting for, examining Mr Elbanna’s true strength as a vocalist as well as the ferocious intensity that the rest of the band bring with them in full force.

“Only (my) death is certain” reveals itself as the brain teaser of the collection. A minute and a half slowly slithers by as both guitarists collaborate with held harmonised notes, until the rhythm style shifts back to fit the work examined previously. Four and a half minutes later however and the tracks tempo changes again, accompanied by strong double bass pedal usage. The experimentation within the track suggests the band decided to culminate the album in the same way they would end a live performance (which would have been more interesting to keep purely as a part of their live performance).

‘Braindead’ reveals itself as a mighty accomplishment for the four young artists, who seem to be growing in strides with each passing year. If they are to continue down this successful path, the strong suggestion would be elasticised underwear.