Too Loud to Live, Too Drunk to Die

Read more
REVIEW album Gehennah Too Loud to Live, Too Drunk to Die

Mistake Listening To It Sober 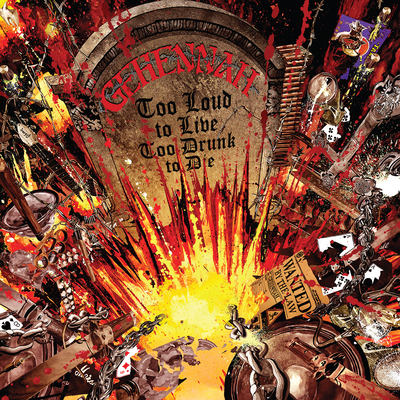 Too Loud to Live, Too Drunk to Die

Well, at least they're honest about it. When asked how they've progressed over their musical careers, members of Gehennah tend to reply: "Not much!" No epics here, just short, loud, fast, bass-heavy songs with strongly Venom-influenced growling vocals (and sometimes shouted backing vocals that remind one of how Venom recently defined themselves as "Long Haired Punks").

No complex stories or commentary about world affairs either: Gehennah stick to their tried and tested lyrical themes of getting drunk, having fights and rocking out.

The quality and memorability of the guitar parts is highly variable. 'Scumbag' has an unexpectedly tuneful solo for a song about crashing parties, wandering around in one's underwear and being unchivalrous to people's sisters.

'All of the Decadence, None of the Success' has classic-sounding riffs and a decent solo, while ''Cause We're a Street Metal Band' has a riff that sounds strangely familiar - Diamond Head, perhaps?

There is an explanation to this: one of the other tracks on the album, 'We Stole Your Song', is a cheeky admission/celebration of plagiarism. After all, you didn't think a band who glorify fighting and drug-taking would draw the line at stealing others' ideas, did you?

The silliest moment on the album, though, is 'Life Metal Must Die'. It's true that 'Life metal', i.e. with a religious agenda, is not welcomed by much of the metal community - but when growled, this title sounds more like 'live metal must die'.

Nobody with any affinity for metal would agree with that, and surely not Gehennah themselves. Their brand of metal belongs on a stage in a pub, or in a festival tent with bars running the length of either side. After all, the drunker you get, the better they'll sound.