Stoned & Psyched Under The Glare Of A Different Sun 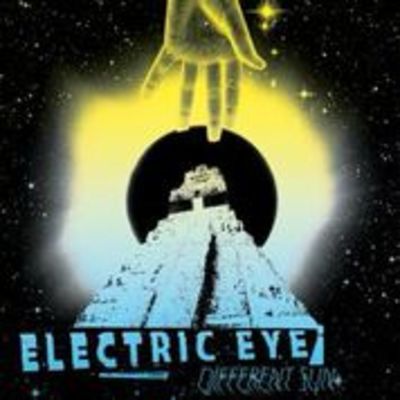 In many ways, Different Sun, the new album from Norwegian band, Electric Eye, is a continuation of their debut record, ‘Pick-up, Lift-up, Space, Time’, with its polished 60’s psych sounds; yet it is in other ways an altogether darker, more atmospheric and diverse production, leaning heavily in the direction of British and German influences, where its predecessor preferred the sounds of their US counterparts.

The album opens with ‘Silent By The River’ a traditional prog rock affair in the style of late 60s/early70s, comprising insistent synth loops, hazy vocals and layers of raggy guitars which midway through, take off into a whirlwind of Hendrixesque riffs only to return to earth with a blaze of fuzzed gravel, bassy thrum and tight percussion. It’s a little bit Deep Purple, a little bit new agey German Psych a la Ash Ra Tempel of 'Freak n Roll/Reunion' fame.

‘All Of This Has Happened Before And Will Happen Again’ is in the same trippy vein as lead single ‘Bless’ with heavy rush of Rosesque beats n bass dominating its psychedelic skyline. Snatches of spoken word flash in and out through a chorus of rushing echoey harmonies, while sitar-like sequences give a mystic twist to guitar driven euphoria. It’s a bit like going on a heady acid trip across a virtual desert filled with sonic mirages and mystical blurs. The vision ends with a dazzling shimmer of guitar before the drums of ‘Mercury Rise’ kick in.

And oh my, what a detour this flamboyant fandango takes us on. ‘Mercury Rise’ is 100% proof T Rex, with ‘Get It On’ (Bang a Gong) tattooed all over it's forehead. From the beat, to the chords, to the vocal – all 'Mercury Rise' is short of is Marc Bolans sequined glammer and glitter paint. The T-Rexiness tops and tails an elongated midsection made up of a sublte guitar lead instrumental that builds slowly to a dramatic crescendo before bursting back into its glam-rock self.

In many ways, lead single ‘Bless’ is a reworked, drugged up, slowed down and vocalised version of ‘6 am’, a track from the band’s 2013 debut album. Melodically and sonically it is its twin, using the same sequences and chords – just with a lot less guitar and synth topspin, and a lot more percussive/bassline tar and pitch. As I've said before, the guitar sequences have a distinctly U2/Edge vibe, while the overall effect is Stone Roses glam tinged melodic anthemic rock, with swooping melodies and interesting guitar sounds. And, as the Roses were heavily influenced by Kraut Rock/German psych the similarity comes as no surprise.

'Heavy Steps on Desert Floor' is Edge (yes again) on a road-trip with a psyched out America (and yes, ‘A Horse with No Name’ did spring to mind several times during my listen to this record, but I put that down to the desert references.)

Album closer, Floyd DSOTM inspo’d ‘Part One’, is an atmospheric instrumental slow burn that builds upwards and expands outwards into the most wonderfully exotic, cinematic musical moonscape; without doubt my favourite track on the album.

You can play ‘Different Sun’ as many times as you want and each time you’ll hear a myriad retro influences, from Can to Syd Barrett, the Stone Roses to Bolan, but no matter what you hear, at the end of the day, the net combined sound is that of Electric Eye 2016.

A more outward looking approach, along with a more intense and inclusive sound, have resulted in a fully-fledged Electric Eye capable of creating progressive, visionary, cinematic soundscapes that fuel the senses, sate the imagination, and linger long on the mind.

‘Different Sun’ by Electric Eye is out now via Jansen Plateproduksjon A.S