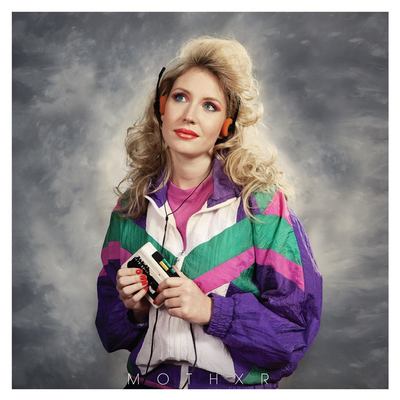 MOTHXR is a band that heralds from Brooklyn, AKA the East London of New York or as Penn Badgley (lead singer) would say "East London is the Brooklyn of New York'. The band were formed through their love of music and allegedly made the album in a rented apartment in less than a month.

'Impossible' opens the record with it's haunting "I want so much. So much. So love me in disguise but now you're just somebody else. All the lies I tell myself. You're impossible", before leading into a solo, almost operatic male vocal and an alternative Hip-Hop beat.

The album would certainly fall under the experimental genre yet manages to maintain pretty strong hooks throughout, in particular 'Touch' or 'Stranger' but just to put a spanner in the works, the guys throw a saxophone solo in 'Victim' or have a pure throbbing 80's banger 'Fight The Feeling' with an infectious chorus to throw you off.

Perhaps the most obscure moment on 'Centerfold' comes in album closer 'I Can See You'll Never Make It Out'. A highly electric number with robotic vocals and a distinct, almost Soft Cell approach about it... and lest we forget the child vocals (or potentially a highly pitched vocal) at various moments through the track.

The album feels very polished and together in all forms and it feels surprising that the majority of the record was made without a label. The guys were making music for fun and actually rejected labels because conversations were had about polishing the guys' sound but that hasn't deferred them.

In fact Annie Mac recently added album track 'She Can't Tell' (quite sonically similar to something you might expect off a previous 1975 record) to her playlist giving the boys some UK radio exposure and having played a few shows in London over the last 2 years (including a sold out show at the legendary Borderline) it would seem MOTHXR have absolutely nothing to worry about.