Anvil Are Back To Set The World Straight 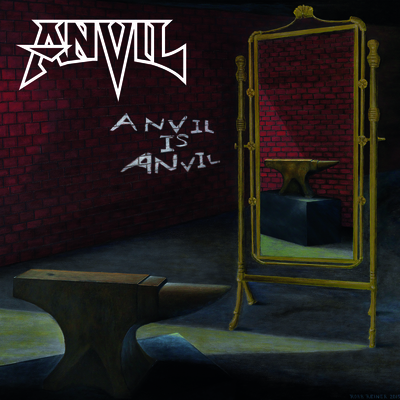 What makes Anvil Anvil? According to Lips Kudlow, the band's songs all start with him coming up with an idea on a guitar and going wherever it takes him. A new Anvil album might therefore be seen as a window into his mind. What's going on in there?

Politics looms quite large. Anvil fans will know Lips' stance on world affairs in general: he deplores violence, religious extremism and war. Since there's sadly a lot of all three going on in the world, it's no surprise that many songs on 'Anvil is Anvil' deal with them.

The current affairs themes are at their most simplistic in 'Gun Control' and at their cleverest in the ridiculously catchy 'Zombie Apocalypse', with its typical Anvil twist (you think you know from the title what it'll be about, but actually the people rushing headlong to war are the zombies). Not much is suggested by way of solutions, but then, the politicians aren't exactly coming up with viable plans to clear up that mess either.

As well as the loss of lives in crimes and conflicts, like many of us, Lips has been mourning the loss of Lemmy. This comes through most obviously on 'It's Your Move', a song surely destined for the set list, full of gambling analogies, with a quick Lemmy impression thrown in. The song with the most Motörhead-like riff, however, is 'Never Going to Stop'. Can't work out why they decided to make that a bonus track, but make sure you don't miss out on it.

Of course, it's never all doom and gloom with Anvil. As anyone who's seen the gigs or the film knows, they don't take themselves too seriously. Yes, an anvil is crushingly heavy, but an anvil dropping is also a feature of classic cartoons, and there are always a few loony tunes thrown in.

Opener 'Daggers and Rum' is a prime example: Alestorm must be kicking themselves that they didn't write it. Closing track 'Forgive, Don't Forget', which also brings new bassist Chris Robertson's skills to the fore, has a message of peace and love set to a musical sound that's anything but.

'Fire on the Highway' is about driving on an icy road and trying to avoid a burning truck, which certainly follows the well-known metal principle of writing about things that scare you. Yet while Robb Reiner's frenetic drumming helps bring the story alive, the excessive use of echo on the vocals makes the image in one's mind look more like a .gif for a funny caption competition. Maybe if you live with that real risk, you have to laugh about it.

For cynics who scoff at Anvil, 'Anvil is Anvil' will not change their minds. However, it does at least have enough good riffs and enough songs that sound like they'll work live to demonstrate why, after years of hardship, Anvil have earned the right to be themselves full-time.