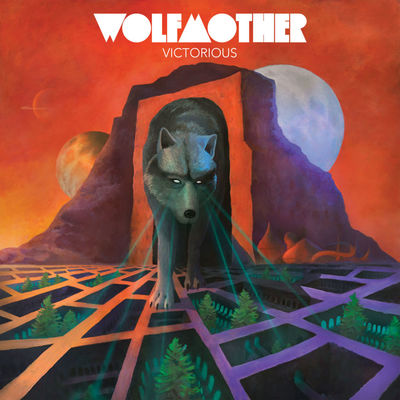 Wolfmother have been embellishing the music scene with their unique brand of hard rock now for over ten years, releasing three successful albums prior to the welcoming arms of 2016. If their new LP has anything to say however, it’s that their streak of praised accomplishment will be lacking none of its potency, amid the invigorating energy pulsating from ‘Victorious’.

The Australian trio retain their signature stoner riffs and gel them together with an exciting re-buff of classic Neo-psychedelia that, to a modern generation, may have needed a firm kick start. Although undeniably Wolfmother from the first galloping verse, each track offers a diverse outlook into their melodic methods, experimenting with a range of lively tempos and dipping their pen into the thick ink of Folk Rock with a splattering of Country around the edges.

The multi-talented musical connoisseur known as Andrew Stockdale, has a great deal of influence over every breath, plectrum pluck and steady beat cascading over each song (writing material for each instrument himself). From a vocal perspective however, he decides to take the scenic cantabile path instead of his usual direct vocal route to the heavens, which seems slightly flawed and lacking his trademarked rock n’ roll temperament.

Certain tracks such as the album opener ”The Love That You Give” and “City Lights” do not stray far from the party-hard cork popper sound their audience are incredibly familiar with, using recognisable traits which act as a gentle reminder of the entity already in existence before experimenting into who they could be.

”Best of a bad situation” and “Pretty Peggy” encompass Wolfmother’s take on late 60’s country rock as well as exemplifying their acoustic abilities while the album titled track, ”Victorious”, competes as a strong contender for favourite soaring chorus, with the message of making a victory of small achievements such as waking up every morning.

‘Victorious’ is arguably some of Wolfmother’s most triumphant material to date. Dramatically empowering music cradling modest messages that should never be considered stale or past their sell-by-date.