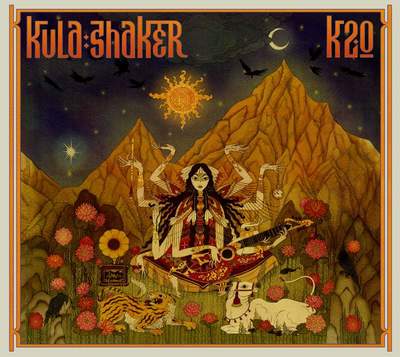 Kula Shaker return to form to mark the 20th anniversary of their debut K with fifth studio album K2.0. This psychedelic, raga rock with splatterings of 60s folk resurrects a sound and it's so refreshing. A fusion of influences, where East meets West and a bygone era meets the present.

If you're a child of the 90s, like me, you'll know Kula Shaker. I seem to remember them being like Marmite - some people, like me, loved them and others dismissed them as novelty.

Bursting onto the scene with debut album K in 1996, they found enormous success as a guitar band who doffed their hats to 60/70s psychedelia instead of the 80s indie that was saturating the Britpop market at the time.

Hits like "Govinda", "Hey Dude" and "Tattva" were a staple in any self-respecting, fishing hat wearing DJ's flight case and CD-Js. Since then, they faded into relative obscurity, mainly due to ignorant Combat 18 twats who misinterpreted their use of the Hindu wanzi as a Nazi swastika.

Now, after *gulps* 20 years, they're back and they're sticking to Indian inspired, sitar loving, good ole fashioned rock n roll with K2.0 - 11 tracks that seems to pay a mellowed homage to its breakthrough predecessor.

Opening with "Infinite Sun", lead singer Crispian Mills chants along to Ravi Shankar inspired rhythms with more than a nod to Jefferson Airplane and The Byrds.

Never ones to shy away from political charged tracks, echoed in "Great Dictator (Of The Free World)" in third album Strangefolk, they're repeating that in (perhaps intentionally) third track "Death of Democracy". This track is very grassroots, American country but more complex and epic.

Seventh track, "Oh Mary", opens with dialogue that sounds remarkably like Paul McCartney. Die hard Beatles fans will probably correct me or roll their eyes at my ignorance. Regardless of my feelings on Macca, this is one of the standout songs of the album. It's bluesy, dark and vintage.

"Hari Bol", the ninth track, is the epitome of everything K2.0 represents. It's acoustic, spiritual, Indian and 60s folk. A big change from their rip-roaring, guitar shredding (I might be exaggerating) back-catalog.

My guess is "Get Right Get Ready" will be a single. It's a mixture of Black Keys and James Brown with Kula Shaker's signature sound running through it - a winning combination. Ending with "Mountain Lifter", they're back to their loud and energetic selves.

I'm a huge fan of the 60s and this album drips with it. It may lack the soaring strings, pounding drums and reverb vocals of Last Shadow Puppets, but just like them it emulates a beautiful retro sound that can only be described as glamorous.

This is a welcomed return to music following a six-year hiatus and sees them return to their psychedelic roots with phenomenal results.