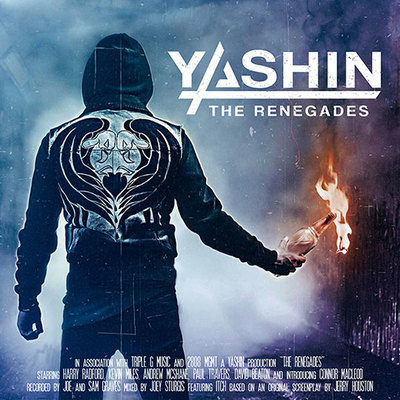 The Japanese translation for the word Yashin is ‘Ambition’, but it is also the Uzbekistan word for ‘Lightning’. The bands new LP, ‘The Renegades’ may start out with a promising spark but turns out to be nothing more than elongated static.

The Scottish sextet have been branded in the past as alternative rock, but their new release sees them experimenting more into the metalcore scene, adapting techniques similar to those who share the genre such as While She Sleeps and Asking Alexandria. The twelve track disc contains an equal range of dividing characteristics, which form a periodic presence but are ultimately disrupted by cheese-filled sample sounds and adolescent lyrics that alter the flow of the music.

A high-pitched ethereal mash of synthesiser sounds flood the opening track, “Spreading The Disease”, giving off an uplifting aura through the musical structure but disappointingly changes its tone mid-play to a traditional metalcore stomp riff, leaving no more illusions or shrouds of curiosity.

“Dorothy Gale” however, shows strong examples of the bands possible potential. Associating the Frank Baum classic with the difficulty of adjusting to a longwinded life on the road, the hurricane-fuelled anthem shows what might have been the defining sound for the remaining tracks to follow.

“The Beginning Of The End” and “Vultures” follow similar successful patterns but the material eventually reaches its limits and has little to offer in terms of the lingering eight songs, leaving an unsatisfying and haggard path left for Dorothy to follow.

For a band who wish to be taken seriously within their field (recently joining forces with major label ‘Sony’), focal points such as sample music reading “now lose your shit”, will only attract the attention of the wannabe minors and separate them from weathered rock followers. A hiccup of overused rock terminology is also noticed and, unless the band are making a statement towards appropriate recycling, “pick it up” should be a declaration best left to rot.

Creating material that also questionably brands themselves as ‘outlaws’ to the pressures of the world is decidedly nonsensical and awkwardly egotistical, considering the overall aim is surely to be united in fighting ‘conformity’ together instead of placing themselves on a pedestal as some sort of righteous example of anti-authoritarianism.

‘The Renegades’ firmly lands a huge “What If” stamp mark in bold red letters across its cover, leaving the audience to ponder if their second album could have been one worth remembering after a few adjustments instead of being listened to once and then discarded to collect dust.