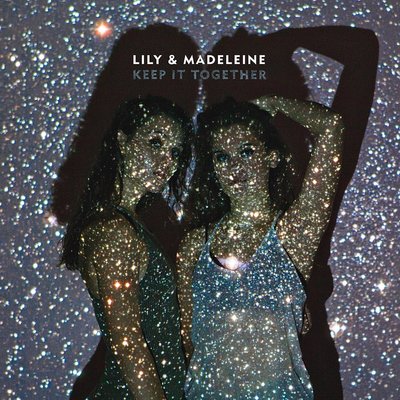 Modern folk music has influence everywhere, but it is twisted into so many different shapes and sizes that anyone unwilling to experiment or enhance the traditional sound can seem staid and dull. Maybe that is the problem with 'Keep It Together', the third album from Indianapolis sisters Lily and Madeleine Jurkiewicz.

Released on New West Records, 'Keep It Together' is their major label debut - their first two albums 'Lily & Madeleine' (2013) and 'Fumes' (2014) having been released by Sufjan Stevens' Asthmatic Kitty label. Described as 'open and bittersweet' on their earlier work, the sisters unfortunately seem to have fallen into something of a rut on their latest album.

There is very little sign of a spark to pique the interest in a series of steady, generally slowly paced songs. The instrumentation feels subdued, and the harmonies, while certainly tuneful also sound far too practiced - as if the girls have been singing together for so long that they have forgotten how to add any dynamism to their vocals.

There are hints of good ideas - usually in the pacier and more musically complex numbers. The album's standout track, "Small Talk" benefits in no little way from a prominent rhythm section, there is a good collision of ideas in the well -constructed "Hotel Pool", and there is a striking offset of vocals against backing in closer "Nothing".

The slower tracks though (particularly "Smoke Tricks") verge on dreary, and there are hints of laziness in song titles such as "Chicago" and "Midwest Kid". There is nothing unsettling, nothing to challenge the listener in this set of songs, and perhaps more worrying there is no sense of an emotional involvement in the music either.

Maybe Lily and Madeleine have been pushed, or have pushed themselves too far, too quickly. It is easy to forget how young they are - Lily is still a teenager - and three albums in four years is a difficult feat to achieve while maintaining the right level of quality and musical development. You hope that they take their time, allow their songwriting and performing to grow and add something much edgier to their next work - that will surely help it to linger in the memory for much longer than 'Keep It Together' will do.