Wolf Down's 'Incite & Conspire" Remains Committed To The Cause 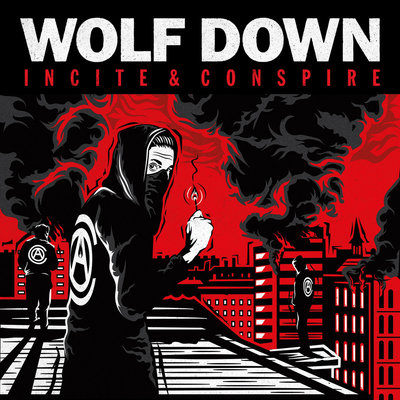 If you are a big supporter of fighting against an oppressor with an insidious agenda, then Wolf Down should already have a presence in your playlist. Their newest album ‘Incite & Conspire’ is no less ruthless or real than any of their back catalogue.

The driven quintet have been opening eyes and ears for a number of years, dishing out healthy political portions in conjunction with a hardcore genre that is slowly resurging in strength after a ten year period of dubious attempts.

Most contemporary stereotypes include hardcore to consist of chaotic music with no lyrical goal higher than inciting damage and destruction to one another (which is a barefaced misconception). It is aimed towards the realisation and awakening of the power of the oppressed, unified by a common hatred of subjugation. Inciting egalitarianism and silencing those who seek to scrutinize emancipation and overpower opinion.

The specific targets in this eleven track cavalcade include the crucial interlocking of human and animal rights alike, the condemning of fascism wrongly interpreted through a higher power and the abolition of endless animal imprisonment, experimentation and slaughter.

The German juggernauts make an immediate and resonating impact with a brief introduction consisting of a liberating nationalist chant which rightly symbolises the Antifa peace mantra, ‘Fighting fascism is a social duty, not an antisocial crime’.

Shortly followed is a feedback fade in and a beefy collection of guitar notes carrying you into contact with the war cry of awareness. “Against The Grain” is the catalyst to this powder keg, insisting you strike the match (illustrated on their powerful album artwork) and empower yourself to speak for those who have no voice, no matter how hard or long the fight persists.

The content itself blends incredibly well, bringing various sub-topics into question as the metaphorical and literal carnage persists. Examining the instrumental aspect itself, the grinding guitar chugs and heavy pedal work become slightly repetitive as the minutes pass, but solidify like concrete when slight alterations are introduced such as dramatic tempo modifications mid-song.

Two tracks in particular speak of blatant blind eye truths. “Flames Of Discontent”, exposes the arm of the law which constantly outstretches its claim on authority and the commanding lyricism of “True Deceivers” which unveils the monstrous fanaticism of religion and abuse of power received through a questionable deity.

With a fade out campfire protest of “All you fascists bound to lose”, ‘Incite & Conspire’ confirms its immediate significance to the genre. It is apparent through every passionate statement screamed in protest, that Wolf Down will remain committed to their objective and shout “the weariness of this world won't get the best of me” in the face of any that claim to be their ‘superiors’.