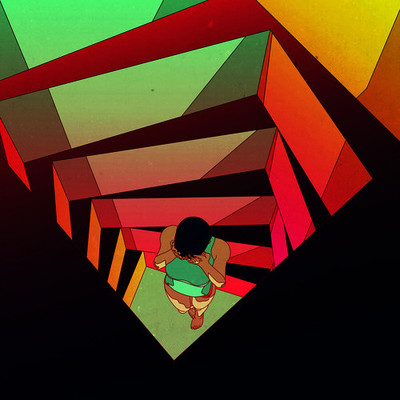 Making a name for yourself through two underground records is quite a turmoil in itself but with a well above average rapping ability and an undeniably creative motivation for greatness, Lushlife is prepared to unshackle his ‘bedroom rap’ beyond its modest four walls and extend his reach to limitless lengths. ‘Ritualize’ is his third album to date but his first album working alongside an arsenal of wish list collaborators including his new-founded co-producers CSLSX (pronounced Casual Sex).

Taking a period of three years to pull together, the high brow Philadelphiac creates a nostalgic world merging factual life events and inquisitive contemplations with an array of sub genres including hip hop, indie, synthwave and electro funk, all wrapped in a transparent shawl of lo-fi immersion. In conjunction with the sheer lack of contact needed from the modernised society to write the material required, the magnitude of the albums presence in the studio, is as professional as it is immense.

Many sub-topics also flow through the twelve celebrity littered tracks addressing the artists ponderings directly. In relation to the global events, Lushlife speaks about the concept of mortality, the balance between tranquillity and disorder commonly found in isolation, the ever-present desire of consistency and personal struggles facing depression.

“The Waking World” is one such song that discusses the reflection of thought aimed directly at a man that shook the world for the worse, with nothing more than a fully loaded 38 caliber pistol and a cold blooded intent. The compilation emits heavenly choruses and short-breath witticisms based around Mark David Chapman with the help of the Swedish indie rock band, I Break Horses. The song concludes with an emotional notion that Mr Lennon did not die, but was reborn to the universe.

Another more delicate and real life situation is spat out in “Incantation”, where the struggles of breaking the metaphorical barriers of writers block can be compared to a death sentence for those who need to turn material around to simply get food on the table. Persistence is permanently present however within Mr Haldar’s rhymes, making it blindingly apparent that he will not be defeated so easily.

His aspirations for brilliance on the other hand, lie in the heart of the album, where the true highlight of the LP waits to reveal itself. “Toynbee Suite” is a ten minute hip hop rap branching into four movements contextualised around the depiction of the license plate sized Toynbee tiles and their relation to certain claims (including the playwright David Mamet who famously suggested they were in relation to his written works).

With the help of three separate artists (Yikes the Zero, Nightlands and RJD2), a synth-filled textual paradise is born with a thick orchestral accompaniment. Ending on the ominous quotation of Julies Oppenheimer reading “Now I am become death, the destroyer of worlds”, it is a questionable assumption to think this was the moment in human history that we truly began to plan our own destruction.

‘Ritualize’ evolves from its mortal shell and involves the listener in subjects which not only evoke emotion and passion but encourage an open-minded train of thought involving intelligent theories and profound ambitions.