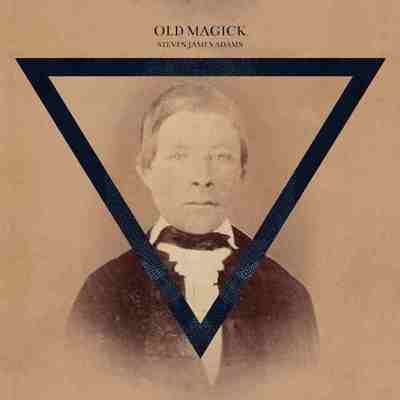 'Old Magick' is the second album from British musician Steven James Adams, formerly a member of Broken Family Band. Adams' first album 'House Music' was released in 2014 and featured contributions from a variety of people including Canadian Dan Mangan, Australian Emily Barker and Justin Young from the Vaccines.

Maybe as a counterpoint to this Adams, working with producer Dan Michaelson has deliberately pared back his instrumentation on 'Old Magick'. The result is folk tinged with gentle guitar and drum backing, majoring on Adams lyrics. He writes subtle and sad songs but the quietness of the instrumentation and the lack of musical tricks means that the album stands or falls purely on the strength of the lyrics.
In places these tell a melancholy tale.

In "Ideas" the singer is clinging onto plans to lure back a lost love - "When you come back I have all these ideas and I need to share them with you". There is an overwhelming feeling of emptiness about the song. Its' immediate successor "French Drop" takes the tale a step further, as the singer is now reflecting on what has gone wrong. "You don't know what you've got until you make it disappear" he tells us (a French drop is the world famous sleight of hand magic trick where a penny seems to vanish only to reappear where you do not expect it to be).

I can imagine a lonely young man sitting in his bedroom pining for his lost love - maybe he was just too boring for the girl with everything else going on around her in the world. "The third world war is raging - you watched it on your telephone" he sings in "Sea Of Words", adding "you didn't make time for love". I wonder if the singer's passivity is the reason why the girl left in the first place?

The rest of the album does not live up to this core lyrically or in terms of interest, although opening track "Togetherness" is another sweet offering. The songs at the end of the album become so insubstantial that they seem to fade into nothing. 'Old Magick' is very gentle, very pretty but ultimately unsatisfying.