Total Re-Ignition Of My Love For Underworld 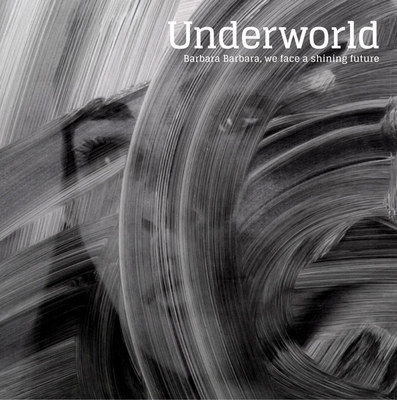 'Barbara Barbara we face a shining future'... how many times have you overheard an incomplete fragment of a stranger’s conversation and thought hmmmm that sounds like the opening chapter of a book, or the final scene in next summer’s blockbuster, or indeed the lyrics to the latest tune from techno wizard-god duo Underworld?

“Life. It’s a touch. Everything is golden.” The opening words on the opening track "I Exhale" (also the first single) hit you after almost a minute and a half of repetitive drum beat and downright tuneful seediness, with reminiscent traces of Wilson Pickett’s "In the midnight hour". Lyrically, it’s akin to being on the last drunken train home listening in to a carriage full of revelers on their mobiles. Tiny extracts of disjointed speech, building up to the repeated final refrain “A light grows over the horizon” mash together to form eight minutes of gorgeousness.

Track two "If Rah" continues in a similar vein, with echoes of "Born Slippy" coming through in the chanted exhortation of “Lunar lunar lunar lunar”. This one definitely disappears off through the stratosphere with a space exploration vibe, and I’d happily bet my bottom dollar that there are little space dudes dancing to this right now on Mars.

"Low Burn" the third track on the album kicks in with a pulsating little rhythm, inducing sensations of being lost in the middle of a field at 3am, all hands waving and some trance-y kind of moves going on.

The mid-point of the album veers off in a different mood and direction altogether. Picked out Spanish guitar solo kind of introduction and a little bit flamenco in style, it’s not at all what I expect to hear after the first three. Life. It’s a touch. And full of surprises. "Santiago Cuatro" is full of delicacy and has shades of fragility and minor chord melancholy. Which makes sense as a bridge across to the other side and the appearance of the final three tracks, all dreamy wistfulness, and a beautiful contrast to the album’s preamble of vivacious playfulness. The only word for "Motorhome" is uplifting, it’s got some kind of pixie/faerie/elf thing going on, overlaid by the stirring reprise to “keep away from the dark side”. Just lovely.

The mellow funkiness of penultimate track "Ova Nova" flows easily and sounds both new and familiar. It’s all spring showers and sunny spells and daffodils dancing in an evening breeze.

Album closer "Nylon Strung" continues with the repetition of the snippets of phrases, but in a softer, gentler and altogether more blissful way than at the beginning of this album. “Open me up. I want to hold you. Laughing.” Evocative of the dawn of every love affair there ever was or ever will be. It’s a total re-ignition of my love for Underworld, and cements my feeling that this album is practically perfect in every way.