Pleasure Trip From A Band On A High 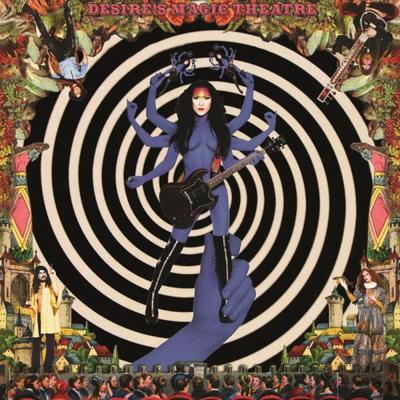 Don't worry, the sense of disorientation is normal. When the most psychedelic of young British bands releases a concept album about tripping out, it takes a couple of listens to get one's bearings. Persist, however, and you'll find the experience is enjoyable.

Paradoxically, the unorthodox shifting time signatures and lines that flow into each other are what we have come to expect as characteristic of Purson. Where 'Desire's Magic Theatre' differs from its predecessor is in a greater focus on a specific time period of influences.

'The Circle and the Blue Door' took forays into a somewhat medieval acoustic sound, but 'Desire's Magic Theatre' is very much rooted in the 60s and 70s. As well as the Hawkwind-esque background fuzz that's never far away and Samuel Shove's adventures on various keyboard instruments that hark back four or five decades, there are nods to Pink Floyd at the beginning of 'The Sky Parade', The Animals on the bass line of 'The Window Cleaner' and The Kinks in 'The Way It Is'. Plus, of course, the 'Electric Landlady' is a bit of a Foxy Lady if the riff's anything to go by.

As well as drawing inspiration from the rock tunes of their chosen time period, Purson's latest album owes something of a debt to the film music of that era, notably Hollywood musicals. There is much more brass in evidence than previously, along with the occasional jazz moment. Most of all, Rosalie Cunningham frequently builds up her vocals as if she's singing a show tune. Check out grand finale 'The Bitter Suite' for the most rousing example.

It may take you a while to understand what the songs on 'Desire's Magic Theatre' are about (and you may sometimes be shocked when you do, as with live staple 'Mr Howard', which tells the story of a pervert). Yet with Purson's trademark hypnotic sound beefing up to match their ambitions, this is a great album to get lost in - and it's impossible to stay still when you do.