<p>South by Southwest is an annual set of film, interactive media, and music festivals and conferences that take... 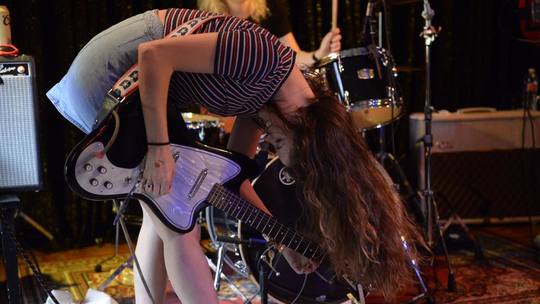 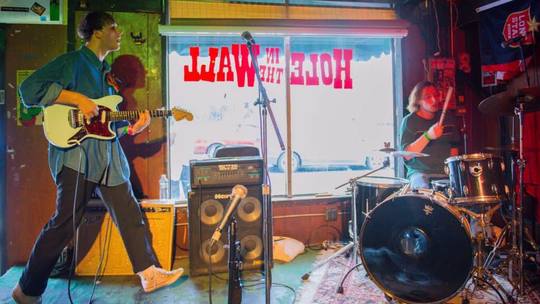 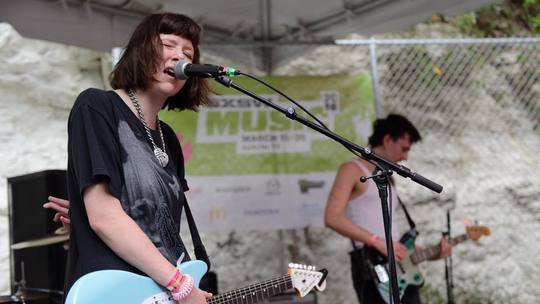 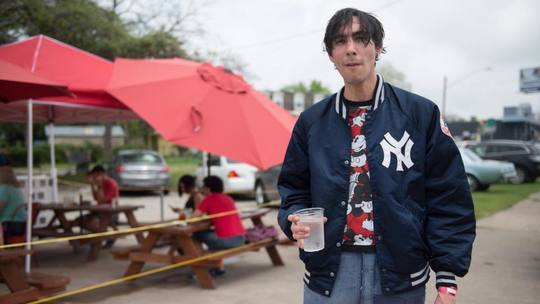 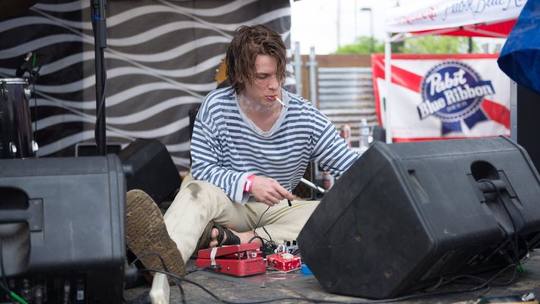 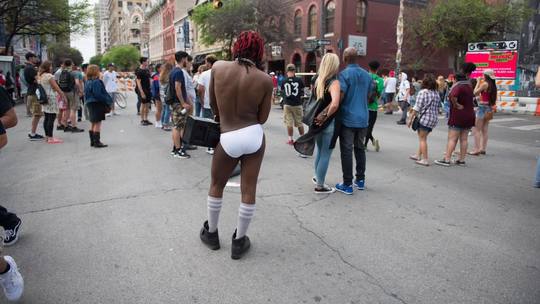 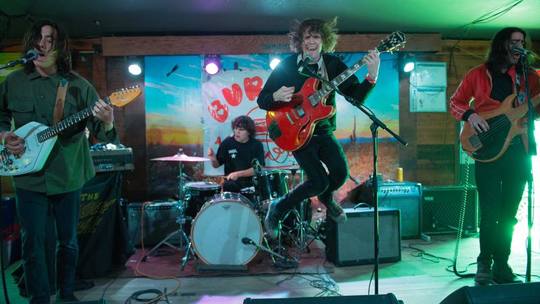 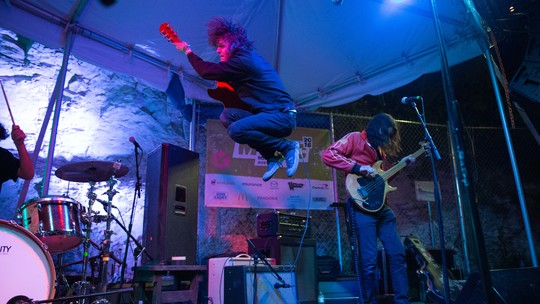 So, we were back in Austin for SXSW for the first time in a few years. We were quickly reacquainted with the madness of 6th street and set out for a week which consisted of Taco’s at least daily, lots of free booze, a reasonable amount of waiting in lines (queuing) and seeing bands all day every day.

Apart from the fact it is about 30 degrees most days, except for the freak thunder and lightening storm on the Friday night, there is something about SXSW that you just don’t get at any festival in the UK, or in the world for that matter. Saying that, five days of fun in the Texan heat can take it’s toll, though we can’t complain, it's hard work for all the bands out here, most playing at least once a day and Spanish scamps Hinds got the record this year for the most shows, 17 in 5 days.

Anyway, here are our top picks of the week…

We spent most of Saturday hanging out at the mighty Burger Records Burgermania showcase at Hotel Vegas, which had one of the best line ups of the week. After seeing Hinds (more below) and Sunflower Bean (they look good but don’t justify the hype) we ventured inside to see who was playing and were blown away by who was playing inside, a five piece garage rock band who had an air of a scouse sound and look to them, the singer had springs for legs and was from stage to floor to other side of the stage whilst storming through their set.

We found out afterwards that this was The Mystery Lights, originally from LA and residing in New York. That impressed we got a t-shirt and a vinyl and went to see them again at midnight supporting Har Mar Superstar. This was an outdoor show that was just as impressive as earlier but with a wild crowd with crowd surfers and just generally going nuts, us included.

After SXSW we were extending our stay in the US in New Orleans and so happened they were playing there, third time in a week, just as good. Catch their shows in the UK in May.

We heard a few tracks before we arrived and wanted to check out this Toronto four price centered around singer Katie Monks and guitarist Liz Ball, first thoughts on hearing single ‘Desire’ was they sound like Pixies, which is in no way a bad thing. But, when we first caught them at Cheer up Charlie’s Wednesday lunchtime, our first band of the weekend. WOW. Big massive fucking WOW.

The Pixies comparison was quickly forgotten about as they are so much more than that. We loved it so much so we went to see them at Hype Hotel the next day ( best venue for unlimited free bar with amazing sound and light set up!) and again at the Spotify show (also good free bar!).

They played a similar set but each time it was equally as mind blowing, singer Katie Monks gravel voiced scream gives you goosebumps and guitarist Liz Ball turns these grungy heavy tunes into something that could translate on to the airwaves, which again is no bad thing, we’ve no doubt Dilly Dally are going to smash it up big time when they come back to the UK in June.

Already favs of ours it was only right to see this Sheffield twosome on the other side of the pond, where their slackery scuzzy sound fits right in. First up they played student hang out Love Goat at midnight under a gazebo on a rooftop, we chatted to lots of locals who had heard good things and it kicked off suitably for their short half hour set, culminating in singer/guitarst Ben Thompson breaking his new guitar, so naturally he chucked it over the side of the venue to the street below, still broken!

Another band who played 6 times, three of which we saw. The 2nd early afternoon gig was LOUD, waking everyone up and kicking off the Stereogum showcase, also one of the best of the weekend (featuring Car Seat Headrest, Dilly Dally, Diet Cig and more).

They also played our final gig of the weekend at 1am Saturday night, it was messy, this had the most mixed crowd of people in there, but everyone was loving it and it was a good end to the week, though we were well and truly broken the next day! We’ll be at the UK tour in a couple of weeks.

After seeing them smash it at their London gig a couple of weeks back we wanted to go see them at the start of their extensive US tour. We caught 2 of DMA’s 8 shows, we tried to go to another at Stubbs one of our favourite big outdoor venues but after the freak thunderstorm it got called off (though we later found out they managed to play late but for just 10 minutes).

First up was a 1am show at the Parish, where they played a set largely from their recent debut ‘Hills End’, the opener from which ‘Timeless’ is a massive tune and there were lots of locals down the front singing along already. ‘Lay Down’ and ‘Delete’ showed the two sides to the band and it was nice to hear oldie ‘Laced’ thrown in at the end.

We also caught them at the Urban Outfitters outdoor showcase at the end of the week, a great set again and they got themselves some free garms at the end too! They’re back in the UK in May and for festivals in the summer so we’re looking forward to catching up with them then.

Since seeing them at secret Garden Party last year we’ve been meaning to go and see them and keep missing their gigs. We catch them twice this week, first up at lunchtime at Hotel Vegas, frontman Oli Burslem clearly looking worse for wear and unpredictable, covered in dirt, fag in mouth slumped on the floor of the stage.

They open with recent single ‘Harbour the Feeling’, their best so far and stuck in our heads all week of the festival “ work every hour that god sends, he never shows up”. They played a short set and the bands playing straight after them had a very hard job to follow.

The 2nd time we saw them, we were the ones that were a bit worse for wear and they all looked fresh faced and very different from the day before. The set was quite varied fro the day before, and whilst they missed out ‘Harbour the Feeling’ this was one of our favourite shows of the week.

Oli Burslem is clearly a star in the making and whilst he didn’t have his usual organ on stage he was making some amazing sounds with his guitar. Just watching him the first thing that springs to mind when you see him play is like seeing Jack White play back when The White Stripes were on their first couple of albums.

It’s hard to capture in a few sentences the live show, but yeah, face melted, another band we can’t wait to see again. They’re just about to support The Last Shadow Puppets for a few shows in the UK, they’re going to blow them off the stage, for sure.

We caught so many bands though and here are the others who we loved, perfect British indie pop from Oscar, New York indie band Drowners, Telegram, Tacocat, Canadian punks Sonic Avenues, some rolling round on the floor leg cycling from And the Kids and two of Hinds 17 shows. We also caught Bloc Party and Jake Bugg, which whilst both playing decent sets it was nothing new, which is what South by is all about.

Austin and SXSW, we love you. You left us broken but we had a blast, we’ll be back.