'Birds With Broken Wings' Soar To Their Proverbial Peaks 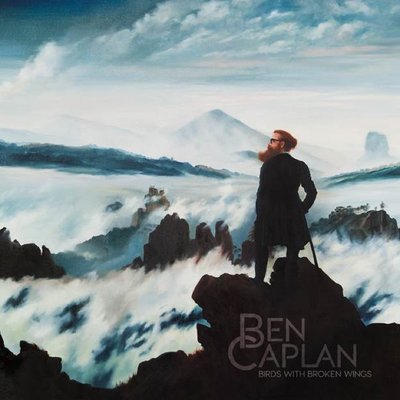 ‘In the Time of the Great Remembering’ was nothing short of homage to every Blues notion that could ever adorn more than one articulate expression. Ben Caplan’s fans however, yearned for more and endured a grinding five year period of twiddling fingers before being able to stretch them across a copy of his second album, ‘Birds with Broken Wings’.

Luckily their unwavering commitment to his cause has been rewarded with Yiddish gold, a splash of crooning Jazz and poetic perfection.

The album artwork interpretation of Mr Caplan being Friedrich’s ‘Wanderer above the sea of fog’ plants him firmly atop the pedestal, ready to bellow deep down into the chasm, progressively pooling his dark undertone until they reach their peaks like the proverbial brim of crystal waiting to taste clear water.

With twelve hypnotic tracks ready to divulge, the musical aspect of the album delves into a rich tradition of Klezmer music and the prevailing storytellers own brand of folk mortal skepticism, along with the familiar accent that gargles gravel with every drunken slur. The lyrical feature however, speaks subjects of political incorrectness, intoxicating enticement and peace in death along with a collection of tales told through a matured poetry that practically bleeds content.

Giving thirty five musicians/collaborators (including his eight-piece band The Casual Smokers) a claimable addition to the material is a feat in itself but the hairy Canadian also masterfully includes a huge assortment of instruments including Clarinets, violins, pianos, trumpets, saxophones, drums, guitars, trombones and a cello which all make their debut through a gradual stringing of seconds.

The opening banjo plucks and bongo beats of “Birds with Broken Wings”, is an unusually upbeat tempo to what we have come to expect but leads on into an incredibly memorable and sarcastic arrangement of familiarly clever lyrics that focus around the falseness of “men with all the answers” and political solutions to man-made disasters.

A similar serious nature runs through “Dusk” along with an air of Jazz/Theatre theatricality which paints a clarinet-filled scene that could easily be musically interpreted as a group of travellers, playfully wending their way down a cobble-stone path on a French boulevard.

One track however, stands out among its fellows as the “Lover’s Waltz”, appropriately left as the outro song to the LP. It is a beautifully subtle but powerful rendition of what it means to experience ‘love’ or what the listener would perceive as ‘love’. A true ballad of first dance to funeral theme proportions.

To successfully verbalise the sound of ‘Birds with Broken Wings’ would be like expressing your affection for colour, it is not something to be explained but rather something to simply accept and benefit from.