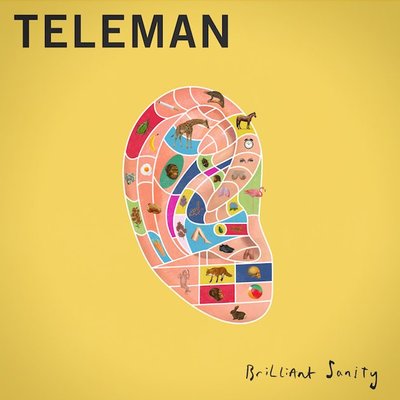 'Brilliant Sanity' is Teleman's second album and follow up to their acclaimed 2014 debut 'Breakfast'. Long time Teleman fans (or those who have read their Wikipedia page) will already be aware that members of the band have been wooing us with their recordings since they exploded out of the rock and roll hub - Reading - in 2004, as Pete and the Pirates.

Their offering has come a long way in over a decade, developing, maturing and shedding members along the way - now a four-piece made up of singer and guitarist Tommy Sanders, his brother Jonny on synths, Pete Cattermoul on bass and Hiro Amamiya on drums.

Opening track, "Dusseldorf", helps the band punch straight to the self-assured point, setting the pace for a record that maintains its' joyful thrust throughout. Its' catchy hook makes you feel like you may have heard it before, and indeed you may have, with it currently dominating the airwaves of UK radio stations like 6-Music and X FM.

Other highlights follow, including title track "Brilliant Sanity", as well as "Glory Hallelujah" and "Melrose", that all tie the album together immaculately. In the digital age of Spotify and YouTube, where singles are often king, "Brilliant Sanity", was calculatedly put together to be a flowing record, with each track thoughtfully laying down a marker for what is next to follow.

If there was ever to be a criticism of Teleman, one instrument that was minutely uneasy on the ear, would be lead vocalists Thomas Saunders marginally nerdy voice, think Alt-J, Metronomy, but perhaps with an extra pinch of nerd. It’s not rock star, and is far from soulful - which fits the music - but after eleven tracks you find yourself looking forward to a break. Were it easier on the ear, Teleman may have gathered an even larger following than one they currently own.

"Brilliant Sanity" is released on the 8th April. If you like what you hear, be sure to get down to see the four piece at one their shows on their UK tour. Failing that, don’t be surprised to see them popping on a host of festival bills this summer.