All Hail The Fox God 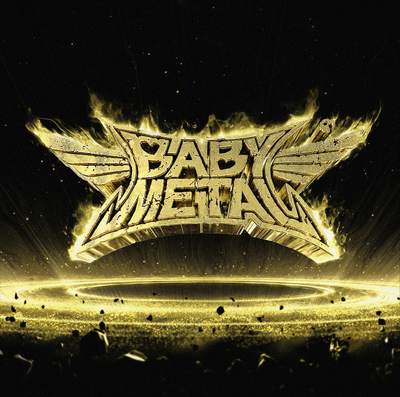 Over the passage of time, loyal followers of a higher power have typically been known to revere those who officially declare and (more importantly) prove themselves to be an agent of a chosen deity. In this particular case, the one known as “The Fox God” has not only selected one disciple, but elected three to stand together in musical unity and bring their message to the masses. ‘Metal Resistance’ is BABYMETAL’s second full length and to reference a much-loved manga series, this album’s power reading is well over nine thousand.

The teen trio known as Su-metal, Yuimetal and Moametal have always had the ability to turn a curios eye in their direction. The unconventional theatricalities they bring to the table blended with the bone-crunching pop-metal material have been nothing short of a wonderfully wacky form of worship offered up to the tall-eared king of carnage.

‘Metal Resistance’ however, takes a more professional approach to their format. Japan have been traversing the Western/European metal genre in the past with a number of attempts, but when approached and manipulated in the positive manner that BABYMETAL have accomplished, they opened new doors to a reasonably unexplored and entertaining sub-genre.

The initial thoughts may be that the twelve tracks in the native tongue may hinder the enjoyment of the LP, but even after noticing a generous smattering of English here and there, the fact remains that they have no real obligation to translate their music any more than bands such as German heavyweights Rammstein or Hungarian folk-metal Metsatoll do. If the album artwork has anything to say, BABYMETAL are an entity ascending into pure playful power, taking on their Super Saiyan form, prepared to obliterate all that challenge them.

The epic proportions of the introduction are almost as staggering as the fans should come to expect of the Japanese performers and the Kami band. “Road Of Resistance” foams at the mouth with the selection of Su-Metal’s impressive vocal range, high velocity guitar solos from Mikio Fujioka and an earth—shattering collection of drum beats from Yuyu Maeta which could easily induce involuntary spasms in the listener’s neck.

Blood-hungry “KARATE” changes the tone to a heavy-footed stomp that leaves a sizeable crater where an ear used to be. With beefy notes and no wavering of Su-metal’s colossal presence, her two accomplices also add their quirky contribution of repetitive short liners and harmonisations that make this one powerhouse of a track.

“Awadama Fever” and “Yava!” call on a techno tidal wave with the help of Hidefumi Usami (God of program) that swamps the listener and sends them deep down the rabbit hole of electronica, slowly ticking off all the boxes of experimentation in the sub-genre exploration.

The Lyrical content has developed a matured voice however, discussing subjects of strength from within, love lost and avoiding toxic relationships but has also lost none of its consistency in the realm of creative oddities such as time-travelling bubble gum.

The reaction to “No Rain, No Rainbow” strays off somewhat from the main body of the album, holding similarities to a modern day Disney soundtrack with its power ballad spirit and moving piano accompanied sequences but goes on to express the bands capacity to move completely out of what admirers may think is their comfort zone with a successful outcome. This track also shows strong examples of the three singer’s harmonisation skills.

“Tales of the destinies” makes its appearance as impeccably progressive and as offbeat as a Protest The Hero track. The experimental taste and sudden yet tangible tempo changes really set a frame of mind that pours creation from the psychedelic moments of six-string creativity.

Ending on the only track spoken in the English language titled “The One”, it goes to show this powerpuff powerhouse have the capability to conquer on a bilingual level. Ascending to their blood flower thrones as not only an interesting focal point to be thoroughly examined in the pop-metal society, but also as true agents of the Fox God who have sent ‘Metal Resistance’ to the heights of heavenly high regard.